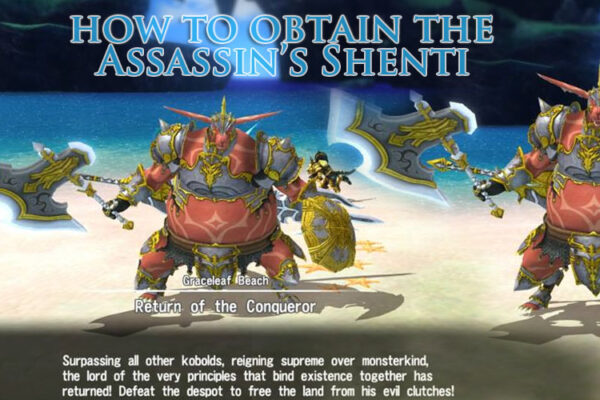 The Assassin’s Shenti is a belt that can be obtained as a Last Attack reward bonus from Ragnamazur the Dynast. This mission can be gotten from the DLC pack that has been released for the game. The mission is called Return of the Conqueror, and like the other DLC missions, it can only be completed in single player.

To activate the Shenti mission, head to the Hollow Area and interact with the console. You’ll see a new option titled Activate DLC Hollow Mission.

There is a recommended level of 195. Unlike other missions, I do not recommend doing this at a lower level.

This Kobold lord has minions with him that hit hard and will interrupt your sword skills, much like their kobold master. If you’re lucky, when you activate the mission, the minions will be chasing the NPCs of the area, leaving you with a bit of time to attack the boss directly.

Hyper Armor and Protective Armor are such a godsend for this fight. Being immune to the incoming damage will mean more time to attack without having to worry about running around and trying to heal. If you’re a higher level then this will be a bit easier. I was level 191 when I did this mission so it was a bit difficult. A friend of mine did this at level 211 and found it pretty easy.

Like the other boss fights, the other buffs I recommend are Perfect Style, Sharp Rage, Strength, Sword Dancer, War Cry, Storm Mind and Variable Storm.

Ragnamazur will jump around and move often like the other Kobold bosses. He’ll also get a red sort of glow around him during certain stages of the fight. This increases the damage he deals while reducing the damage received. I noticed some of my attacks that had been powerful before the glow, would be hitting for weaker amounts despite the same buffs/debuffs applied.

He’ll move around a few times before settling down to attack. Have your partner be in front and take the hate while you slip behind and unleash your most powerful Arcane skill. If you have OSS unlocked then do the chain because the damage that it’ll deal will be massive. My Nebular Empress, alone, wiped out just over one bar of his health.

Next you’ll want to use whatever skills you have – you can also opt to quickly switch weapons if you have the arcane skill unlocked for them. Dodge if he turns to face you.

If the minions chased the NPC’s then save the invincibility buffs. You’ll want to use them when they return. If you’re powerful enough, you’ll be close to defeating the boss as they wander back over and the buffs will see you through to the end. If not, you will need to dodge and use other defensive buffs. You can kill the minions but they do respawn. Often you’ll have just wiped them out when the first two respawn which is frustrating. I recommended just focusing on the boss if you can, though you are able to take out one or two minions if they’re overwhelming you.

There is a good chance you’ll fail the first couple of times. That’s okay. He is pretty tough. Just remember to use all your powerful attacks while under the attack buffs to deal the most damage. And remember to tell your partner to back off when he’s close to death because you don’t want them getting the last hit and the last attack bonus.

Okay, but why?
You might be wondering why you want to obtain this belt. If you’re going for the Boss Executioner build then this is one of the pieces for the build. The -500 defense might cause people to turn away but considering the build is Attacker, you’re not going to have much defense, if any, to begin with. The Boss Executioner build is exactly that – a build designed to kill bosses fast. Generally one full OSS chain will be enough to achieve this.

Did you ever play Shenti?