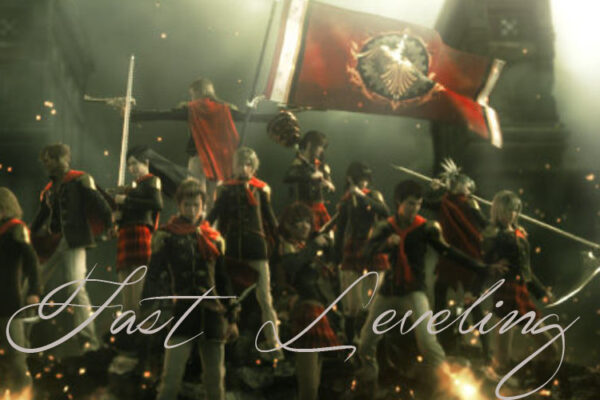 This is one of the leveling spots I found in Final Fantasy Type-0 and can be used even when you’re AFK. It’s not super fast by any means but it’s decent. So long as you have access to the MA Demolition mission you can do this any time.

To begin with you’ll need the Avoid defense skill which is obtained from the moogle just outside the entrance of Akademia. Avoid is rewarded for having a total of 50 hours play time. This skill has a chance of automatically dodging an enemy attack so long as you have MP.

Next make sure you have either Deuce or Ace with their Square attack being a regular attack(so for Deuce it’s singing her flute and Ace is throwing cards). Have weapons that increase attack by 8 since you’ll most likely have access to it, equip Avoid to your main(Deuce or Ace), and either Cure or Avoid to the other two you’ll be taking. If you’ve gotten through to chapter 7 and have earned the two growth eggs(one from a quest, the other from the moogle that awards Avoid) you can equip them and earn even more experience.

Now you’ll want to do the MA Demolition mission(the one where you fight Brionac at the end), put the difficulty on Officer and head to the first part of the sewers. If a Marduk spawns then just abort the mission and try again. Note: In order to keep the gained levels you’ll either need to finish the mission or abort the mission; aborting the mission will lose any items gained by you get to keep the levels. I recommend aborting as there is less risk VS going to the end and perhaps getting wiped out.

Refuse SPP help or your other two characters won’t level.

Stand in the corner, hold down the Square button(I used a rubber band to keep the button pressed) and watch as the enemies die. You can keep doing this so long as you’re alive; I left my console on over night and came back to my characters in their level 40s(they started at level 20s).

You can use this mission for SPP points as well. Same area just accept their help and leave the console on while the characters get enough kills. You will need to finish the mission to be awarded the points! I earned 15k points in one run.

Just be sure to keep the controller plugged in so it doesn’t turn off/run out of battery otherwise it pauses and thus no progress.

Another method of leveling is using the Secret Training. Only 1 character can be trained at a time and goes by real life time. 24 hours is the max you can train that will yield rewards; any time after that and there will be no additional experienced gained. You can also do the training, then change the time on you PlayStation 4, go back and the training will be done. Doing this can max your characters in about 30 minutes.

I’ve stuck with the MA Demolition mission as you can also earn SPP rewards(for example get X amount of kills with the character) which is handy for unlocking other more powerful weapons.