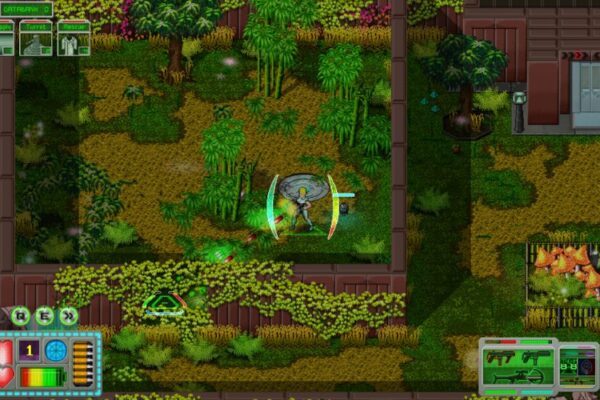 In the distant future, weapons development and research has been banned worldwide. Sounds like a difficult thing to keep in check, right? Such is the case, as secret weapons base Arch City continued their research, hidden away from the Kite Review world. A robot outbreak threatens to destroy everything Arch City has worked for, and now it’s up to you and your Human Operated Remote Droid – or H.O.R.D – to take back control.

Lab Cat Games’ Kite is a fast-paced top-down shoot ’em up beaming with retro flair. The first thing you see upon booting up the game is a fierce looking woman right before she gets outfitted with her droid equipment. The whole sequence is oozing with 80’s cyberpunk flavor, and it sets up the sci-fi mood of the game. Kite is filled to the brim with bright and colorful pixel art that creates a clear image of the city. Speaking of Arch City, you’ll be exploring outdoor, lush environments with all sorts of trees and plants. At the same time you’ll be wandering in an out of hi-tech buildings littered around. 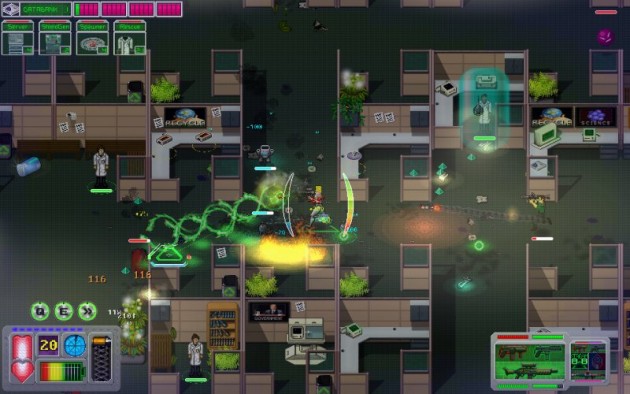 Mags, the name of the H.O.R.D you control, has three slots for weapons. She can carry two small weapons which include pistols, swords, shotguns, and the like. Additionally she can carry one two handed weapon for the big guys, which include what you’re probably expecting – rocket launcher, rail guns, and more. Kite plays out like a typical top down shooter, and swift bullet dodging is the name of the game here. To help you out, Mags is equipped with a bullet time-esque ability called the “Tempo Drive” that lets you elegantly weave around incoming projectiles. She also has turbo legs that lets her zoom around at the speed of sound. To top that all off, she also has access to two special abilities that can be swapped out for different ones. Basically Mags is packing heat, and you’re going to need it!

The early levels of Kite are designed to get you used to the volatile pacing of the game. Picking off enemies one by one is one of the best methods of dealing with any group of enemies, and to do this you’ll need to take things slow. You’ll learn quickly that rushing in guns blazing will get you overwhelmed very quickly, and when things get super chaotic it’s almost impossible to keep up with the action. Remember the trees and plants we mentioned earlier? Those can abrupt into flames if you shoot them, and fire lingers around for a couple of seconds. Touching the fire will appropriately damage Mags, so it’s a bit of a control mechanic. While there definitely is a time and place for shooting everything in sight, control and precision are rewarded too. Some levels also have mines hidden around, and they’re only destructible if you’re close enough, further reinforcing this design.

Of course, we can’t all be perfect and precise, and there will be moments where you are completed outnumbered and overwhelm. This is where the combat of Kite really shines, as utilizing every tool at your disposal feels fast, fun and extremely satisfying. Mags has about four different resources you’ll need to manage, not counting her health and shields. You have weapons that run on energy, weapons that run on bullets, your turbo legs, and your tempo drive. Managing all of that plus using your two abilities all the while dodging enemy gunfire takes some practice, but once you pull it off you’ll feel like a invincible combat droid. 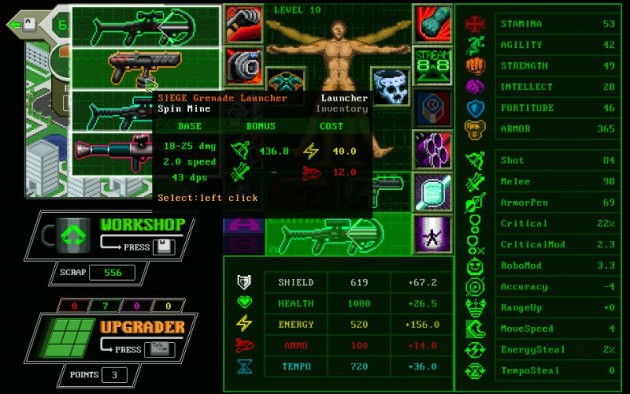 The RPG elements also complement the gunplay perfectly. As you rescue researchers, you can develop better gear for Mags. Mags has a ton of different equipment slots, much like an action RPG. There are also the aformentioned weapon choices that let you play Mags however you want, from a long range sniper to a close, in your face laser axe wielder. Mags also has access to four different upgrade trees, much like character specializations you find in MMOs. The four different trees are tailored towards Mags’ base abilities, so you can build her to your favorite playstyle.

Kite is a slick game that is not only fun to play but cool to look at as well. The RPG elements go hand in hand with the shooting action and doesn’t feel tacked on. The different weapon types and upgrades give you plenty of options to play around with and adds a lot of replayability. Pick up Kite if you want some good ol’ shoot ’em up action wrapped up in a stylish package.