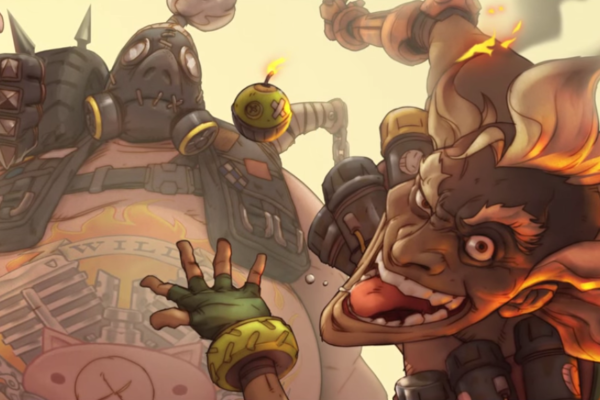 If there’s one thing that Blizzard’s upcoming team-based, first-person shooter Overwatch is missing, it’s more villainous characters for its playable roster.  Of the 16 previously revealed playable characters, only two are unambiguously bad guys and having two teams of heroes regularly going at each other just seems off.  That imbalance has become a little more even with the two newest additions to the roster: Mako “Roadhog” Rutledge and Jamison “Junkrat” Fawkes.  Both hail from Australia which, in the world of Overwatch, has been transformed into an appropriately Mad-Maxian wasteland following a robot uprising known as the Omnic Crisis.  Roadhog and Junkrat are two men who have been hardened by the harsh landscape of their homeland and driven mad by radiation exposure.  The duo is responsible for a public spree of chaos and destruction as Junkrat hunts for a mysterious treasure while Roadhog simply wants his cut.

Roadhog is a shotgun-wielding tank who can fire off short-range bursts or a ball of shrapnel that bursts on impact.  When opponents are too far for him to blast, he can pull them in with his chain hook that comes complete with inevitable Mortal Kombat quote.  He also has the ability to heal himself with a gas tank and keep himself on the front line.  His Ultimate Ability is Whole Hog, which converts his shotgun into a Gatling gun to output massive damage for a short time.

Junkrat is a demolitions expert whose primary weapon is his Frag Launcher that can lob and ricochet grenades that explode on contact with an enemy.  He can also set traps with his manually-triggered concussive mine, which he can use on himself to propel through the air, or a bear trap that damages and immobilizes the first person to step into it.  Even in death, Junkrat is dangerous as he drops several live grenades in his final moment, forcing opponents to keep back for just a moment more or going down with him if they get careless.  His Ultimate Ability is Rip-Tire, which gives the player manual control over a large bomb fashioned out of a truck tire that can climb walls and explodes either when manually triggered or makes contact with the enemy.  It’s an excellent tool for breaking up enemy encampments, but it leaves Junkrat completely immobile and vulnerable while in use, so finding a safe place to use it from is key.

Overwatch is scheduled to enter public beta later this year.  You can learn more about Roadhog, Junkrat, and the rest of the cast at the official Overwatch website.  Are you interested in trying out either of these anarchistic combatants?  Leave a comment below and let us know what you think.