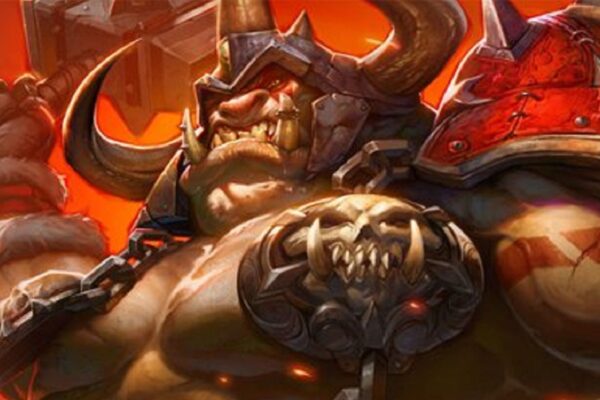 With Ragnaros defeated, it’s time to turn our attention to the dragon Nefarian and his minions, starting with Highlord Omokk at the gates of Blackrock Spire.  This ogre wields formidable power, but it’s easy to outsmart him  once you know his weakness.

Naturally, Omokk runs every ogre card under the sun in his deck.  Boulderfist Ogre, Dunemaul Shaman, Ogre Ninja, and even Mogor the Ogre all stand ready to crush you and your minions.  Ogres aren’t his only minions as he also has Elven Archer to ping down your minions, Abusive Sergent to buff his ogres, and Cruel Taskmaster to do both.  There is also the Charge spell that allows those burly minions to attack immediately.  Omokk’s hero power further adds to this sense of crushing power as he can easily destroy a random damaged enemy minion for only 1 mana.  Finally, his exclusive card, Time for Smash, deals 5 damage to a random enemy and gives him 5 armor for only 4 mana.  He also has the uncollectable Flameheart spell for more armor and card draw.  Omokk is an intimidating foe, but ogres tend to be pretty clumsy in Hearthstone and his forces can be toppled with a simple trick.

Obviously, building a deck of tanky minions with Priest, Druid, or Warrior is never going to work as Omokk’s power will wipe your heavy-hitters in a flash.  However, an aggressive Warlock deck with a focus on deathrattle and low-mana cost is an excellent way to overwhelm him.  Nerubian Egg, Haunted Creeper, and Loot Hoarder will all work wonders against him.  Add onto that cards that play to filling the board like Knife Juggler and Implosion and you’ll easily keep control of the game.  His hero power will be rendered meaningless as most of your minions will either never be in a damaged state or will benefit you from dying.  He also lacks any types of AoE effects that could wipe your swarm of small creatures.  Many ogres will end up attacking the wrong target, making your swarm of minions a powerful defense.  That said, you should still pack a few cheap taunts like Voidwalker and Annoy-o-tron to protect yourself.  Follow this trick and the Core Rager card should be yours in no time. 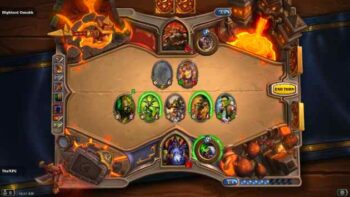 The same tactic can work on heroic as the fight is mostly the same.  Omokk’s hero power has been upgraded to be an autocast and can destroy any random minion on your side of the board.  As such, you should never play a single minion on its own save for Nerubian Egg, which you should try to get in you opening hand above all else.  If you can’t get an egg to start off, tap on turn 2 and wait until turn 3 to dump as many minions as you can at once.  Also, Omokk starts with 15 armor on top of his 30 health to make for a lengthy fight.  Don’t forget that he also has those armor-granting spells at his disposal.  As such, you will need to add some survivability to your deck with Antique Healbot and Jaraxxas to outlast this durable adversary.  Be wary of your health as those ogres will get at you more often than you’d expect.  You’ll also need the ability to burst him down once you’ve set up your swarm.  Combining Power Overwhelming with Shadowflame is an excellent way to keep the pressure on in the face of his ogre army.  It will take plenty of time and luck to bring him down, but clever plays will knock this brute down.

With Omokk toppled, the next stop will be General Drakkisath.  Like Omokk, he can be fearsome, but there is one simple trick to defeating him.  Check back next time to find out how.