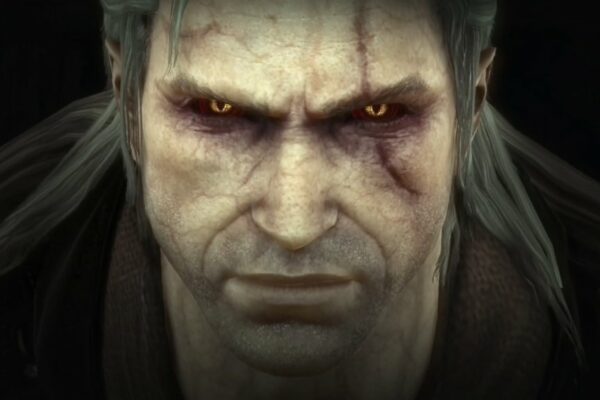 Geralt of Rivia is the main protagonist in Andrzej Sapowski’s The Witcher books, and CD Projekt Red’s The Witcher games. He goes by multiple names, these include The White Wolf (because he has pure white hair and is from the Wolf School), Gwynbleidd (Elder Speech for White Wolf), and Butcher of Blaviken (he thwarted the secret plans of Renfri and her bandits to kill Stregobor and the innocent but as this was not known to the general public it looked as though he killed them for no reason). Although being known as Geralt of Rivia, he isn’t from Rivia. This is because Master Vesemir encouraged all Witcher apprentices to adopt and create a surname so they sound more approachable and trustworthy.

Geralt is a Witcher, which is a professional monster hunter. He was abandoned by his mother at  Kaer Morhen, which is the Witcher’s stronghold, not long after being born. He belonged to the Wolf School, there are three other school’s and these are the Cat School, Viper School, and Griffin School. Geralt was subjected to mutation from a very young age at Kaer Mohen. The mutations he underwent can be fatal to many, however Geralt survived them all during the Trial of the Grasses. The Trial of the Grasses is a trial which all young Witchers-to-be must undergo, they must take a mixture of ingredients (known as the grasses) and this is an extremely painful test, with less than half of all young Witcher’s surviving it. Geralt survived, and not only survived, but his body resisted the changes better than most and because of this he was subjected to even more dangerous and experimental procedures. As a result of the experimental procedures he lost all pigmentation in his body, which is why he has white hair. In return for taking the ingredients and passing the trial, he was rewarded with superhuman reflexes, enhanced speed, strength and enhanced senses. He also  has the ability to open and close his pupils at will giving him night vision. Unfortunately the changes he undergoes leaves him sterile, like all Witchers. He also became a master swordsman due to his intense training from a young age.

Not only being a master swordsman, Geralt has the abilities to produce signs. They are known as signs because they do not need any sort of magical formular to produce them, all they need is the correct hand gesture and concentration. Hence it being called a sign. Signs are forms of simple magic and Geralt can perform all six known signs. These are the Aard sign (a concentrated form of telekinesis enabling the destruction of walls and the ability to throw back enemies), the Igni sign (which is pyrokinetic and allows Geralt to set opponents on fire, or simply to create fires), the Yrden sign (which allows Geralt to place a magical trap on the ground to immobilize enemies leaving them vulnerable to all of his incoming attacks), the Quen sign (which is a protective shield that allows all incoming physical attacks to be absorbed), the Axii sign (which tricks another enemy to fight along side you, becoming your ally for a short time) and the Heliotrop sign (which has multiple uses, in the book it is a magical shield which deflects all magic, and in the Witcher 2 it is a force field which slows down everything inside it, except for Geralt).

Geralt, like all Witcher’s, carries two swords. One sword is made with silver and the other sword steel. He carries both of these swords because the silver sword is for monsters and monster like races. Meteorite swords, which are swords made from meteorite ore also count as silver swords. Steel swords on the other hand are for humanoid races, such as humans, dwarves and elves. Geralt travels the land in search of monster contracts, as that is the purpose of Witcher’s, to rid the world of as many monsters as possible and earn as much coin as they possibly can while doing it. Geralt says that killing the monsters is a last resort, he would rather reverse the curses and save them where possible, such as Nivellen (a character from a short story), a cursed man who was made to look like a beast and Adda, King Foltest’s daughter who was born a Striga as a result of a curse being put upon her while in her mothers womb because of the incestuous relationship between Foltest and his sister (Adda’s mother), also named Adda. Geralt wears a silver wolf medallion (because he was of the Wolf School) around his neck which he received after he completed his training at Kaer Morhen, it is a symbol of the Witcher profession. This medallion reacts and vibrates whenever there is magic nearby, it also is harmful to monsters because it is made of silver, an example is when Geralt realises that Nivellen  cannot be a monster because he touched his medallion and suffered no side effects during the short story ‘A Grain of Truth’.

Geralt’s best friend Dandelion, whom he  met at the fête in Gulet once said, “Is he a good man? I do not think so. Does he try to maintain his humanity? I believe he does.” This sums up Geralt perfectly. He has his own Witcher code of morals and ethics, and tries to stay out of politics and follows his own code. In a world full of unscrupulous, and evil characters, Geralt tries to remain neutral where possible and rarely deviates from doing so.  It is also said that Witcher’s are supposed to have no feelings or emotions, but this is untrue with Geralt as he has a deep, if somewhat complicated love, for Yennefer of Vengerberg. He also develops a fatherly love for Ciri, the only person he considers to be family to him. During The Blood of Elves book, Triss Merigold, a friend and future lover,  falls ill when travelling with Geralt and Ciri and throughout this time Geralt cares and looks after Triss, helping and caring for her, such as cleaning her, bathing her, and helping her go to the toilet. This is all much to the surprise of the dwarves that they are travelling with, who claim that they wouldn’t do what Geralt is doing for Triss, for their wives. She also becomes his main lover in the first two Witcher games. Geralt is a firm believer in choosing the lesser evil, and always chooses violence as a last resort. He will stand up for the innocent, but he will not, where possible, take sides between two equal forces because he knows how much pain and loss he could cause the opposing side. 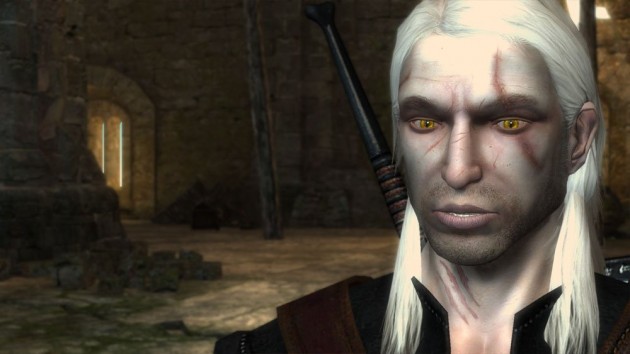 At the beginning of the first game, Geralt seeming comes back to life after he was outnumbered and murdered with a pitchfork by a mob of angry humans, attempting to purge Rivia of non humans. Geralt stood up for the non humans and was attacked because of this. His death was witnessed by many, including his friends the sorceress Triss Merigold and dwarf Zoltan Chivay. After seemingly coming back to life in the first Witcher game he is saved by the last remaining Witchers and returns to Kaer Morhen with no memory of his previous life. During the rest of the first game, The Witcher, Geralt intends to hunt down The Salamandra, an evil organisation who ransacked Kaer Morhen at the beginning of the game and stole the Witcher’s mutagenic potions that are used to genetically alter Witchers. He goes after the two people behind the attacks, a mage named Azar  Javed and an assassin named The Professor. Once he killed Azar Javed it is revealed to him that the Grand Master of the Order, Jacques de Aldersberg,  betrayed the king and that he is the one behind Salamandra’s operation.

During the game you can make several choices as Geralt, you can remain neutral with Triss Merigold, side with the Squirrels with Yaevinn or side with the Order of the Flaming Rose with Siegfried . Whoever you side with, will ultimately come with you on your hunt for Jacques de Aldersberg, however you will end up going for the Grand Master on your own as your other companion will be injured, or Geralt will trick Triss into leaving him to fight Jacques alone so she will be safe. He is transported to an illusion where Geralt finds and kills Jacques de Aldersberg. Geralt also meets the King of The Wild Hunt who has been following him throughout the game. He too wants the Grand Master’s soul, and they end up duelling for the soul of Jacques de Aldersberg, where Geralt prevails and kills him.

During the epilogue of the game, an assassin attempts to kill King Foltest, who fails due to the involvement of Geralt and ultimately perishes at Geralt’s hands. 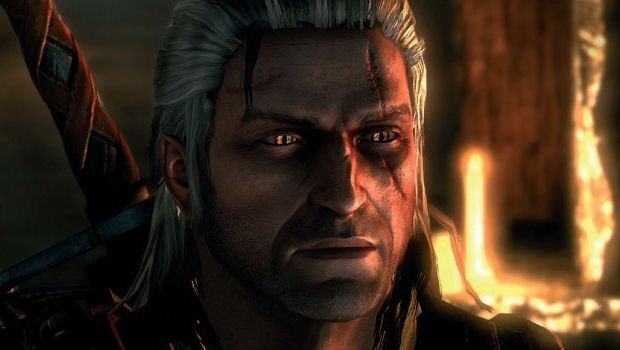 At the start of The Witcher 2: Assassins of Kings, another assassin, who knew Geralt before he ‘died’, named Letho was successful in his attempt to kill King Demavend of Aedirn and King Foltest of Temeria. Geralt was present when Letho killed King Foltest and was unable to stop Letho from doing so, and was the only person seen with Foltest when he was murdered, therefore he was the one who was believed to have killed King Foltest.

Commander of The Blue Stripes (Temeria’s special forces), Vernon Roach, who Geralt met earlier that day, believed that Geralt was innocent and helped him escape from the dungeon he was being held in and Geralt, Roach and Triss left to go in search of Letho, the real kingslayer and clear Geralt’s name.

Just before arriving in Flotsam, the three of them are attacked by Iorveth the leader of the Scoia’tael (squirrels) who assisted Letho in killing King Foltest. They get out alive thanks to Triss’ magical capabilities, creating a shield bubble that the elven arrows can’t penetrate. Geralt saves two friends, Dandelion and Zoltan from being hung in Flotsam. Later on Geralt tells Iorveth that Letho intends to betray him, and following upon this Geralt has to choose Roach’s path or Ioveth’s.

Following Ioveth’s path leaves Geralt fighting on the side of Saskia the dragonslayer against King Henselt, who ends up being a dragon herself, under the control of Philippa Eilhart. Later on Geralt must choose to save Philippa or Triss (who was previously kidnapped by the kingslayer Letho and is currently being held prisoner in the Nilfgaardian camp) or save Philippa who is the only person who can lift the spell off of Saskia.

Following Roach’s path leaves Geralt fighting on the side of King Henself, against Saskia. King Henself kills Roach’s men and after Geralt defeats Henselt’s personal guard, Geralt can choose to spare Henselt’s life or let Roach kill him. Later on Geralt will have to choose between Princess Anais of Temeria (one of Foltest’s bastard children) or Triss.

If Geralt did not choose to save Triss, then violent riots against all magical users occurs throughout the Northern Kingdoms. If he did save her, then the Conclave is restored. Letho then wants to meet with Geralt, to tell him of the Nilfgaardian plot to damage the Northern Kingdoms. Geralt can then choose to let Letho go, or fight him to the death.

Throughout the game, Geralt slowly remembers parts of his previous life before the events in Rivia.

The games are considered canon and are separate from the stories, all events transpire after the books.