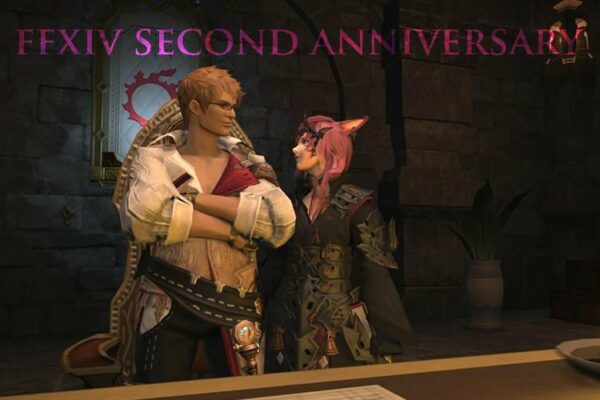 If you have not completed the event yet and want to avoid spoilers, click away. There will be spoilers!

As of August 27th, 2015, Final Fantasy XIV: A Realm Reborn celebrated it’s second anniversary. For those with Legacy status, it’s the fifth anniversary since 1.0 arrived on the scene. To mark this wonderful milestone, the special event The Rising has returned, this time tailored for the second anniversary rather than the first that hit last year.

This event makes us complete a special F.A.T.E(no surprises there) before being treated to a scene and taken to the 18th Floor. You’re greeted by Naoki Yoshida who thanks you for playing the game. Once you have control of your character you can go around and interact with the others, from the music producers to battle leads. Each one thanks you and it made me teary. They acknowledged us, treated us like actual people instead of simply money bags. And you don’t get that much these days.

You can see how much they love this game and how much time, energy and soul they pour into our beloved Eorzea.

Not only did we get thanks but Naoki even talks about how the now successful game was once met with a ruinous fate and by tearing it down and rebuilding could we hope to build something better. And he did. While the team may thank us, the players, I wish to thank them as well. A game is not a game without players to play and a game is not a game without producers and designers.

So here is to two years of A Realm Reborn and five years since it was created. Let us hope there are many more years to come.