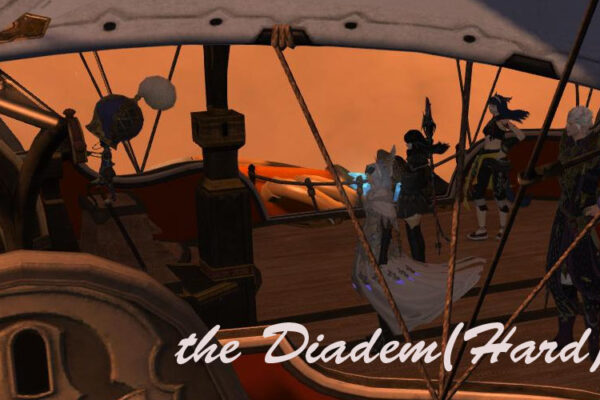 In this guide we will be going over everything important that we currently know about the Diadem(Hard).

The Diadem(Hard) is unlocked by sending your airship out to find the area. It’s random whether or not you’ll find it so keep trying until you get it. The airship must be rank 50 and discover Sector 22.

One of the most important things is that so long as one of the party members has access to Diadem(Hard), the rest of the party is able to enter. The member with Hard mode unlocked must be leader to be able to start the mission. Another important note is that even if 7 of the members do not have a free company or access to an airship, they can still join in. So long as the party leader has the requirements, you are golden!

To enter though, everyone must have Ceruleum Tank which is purchased with Free Company points. The cost of this item is 100 company points.

As you’d expect in a hard mode version, the mobs here are tougher. They hit harder and have more health than their easy and normal counterparts. Rank 5’s are more common and the rank of the mobs range from 3-5 rather than 1-3 on easy and 2-4 on normal. Star ranks are a guaranteed spawn from Fresh Tracks.

Mobs have a higher chance of dropping silver and gold chests. However, the armor and accessories are the same ilvl and same stats that you can acquire from easy and normal. There is just a higher chance of getting ilvl 210 gear rather than ilvl 150 and ilvl 180.

At this point it’s not worth farming Hard mode unless your server and data center have plenty of free company’s with Hard mode unlocked or if you are in a large free company with plenty of members that will join up. You can sign up as an alliance for Hard mode though when you get in you won’t be treated as one.

The reason behind not farming Hard is that it can take several minutes to kill a Star rank, especially if you’re the only party there. It’s both quicker and efficient time wise to farm Normal for gear unless you don’t mind spending time for lower amount of rewards.

Well, that is all the important information that has been found. Hopefully this helps for anyone wanting to attempt Hard mode and were unsure how to go about it. Good luck, have fun and watch those Star ranks and their knock backs and meteors!