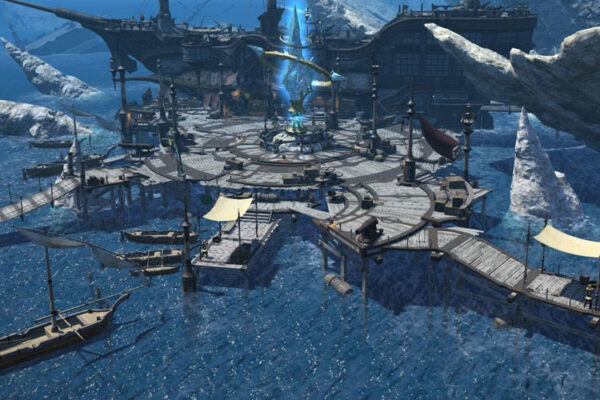 Seal Rock(Seize) is the newest area and mode to hit the PvP scene in Final Fantasy 14. To enter, you must be level 60 and have done the quest “A Pup No Longer”. If you have an item level higher of 150, you will be synced to that number. Rewards for completing Seal Rock are:
50 Tomestones of Law
20 Tomestones of Esoterics.

PvP is not my strong suit. I don’t usually play games for the PvP aspect and I’m not the best PVPer. In my time playing the Frontlines, and with this new mode, I have learned some things that can help you and your Grand Company achieve victory. Though victory is never guaranteed, it’s all about trying you doing your best.

Team Work and Communication
Important and something that seems to be lacking at times. You should stay with your party and move together. Splitting up only ensures other teams will swarm to you, especially if you decide to do the lone wolf strategy. Remember, team work! Co-ordinate with your alliances and figure out whose taking what point, whose staying behind at the node to defend it.

Nodes
It’s all very well and good to activate a node for the team. But leaving it undefended is a good way for the opposing teams to nab it. You want to remain behind until the ‘health bar’ is almost at zero before moving on. You don’t want to leave just to have another team claim it and start getting points.

Stay Alive
Not an easy feat. Especially if an entire team manages to converge upon you. If you see a group of enemies, don’t engage. Do not be greedy. Surviving is more important than getting a kill. You may have noticed that when members of your team die, your points go down. Yes, that is right. Dying causes you to lose points. I’ve seen a team lead by 300 points, only to get extremely greedy and be overtaken at the last minute die to multiple deaths.

If a node has been overtaken by a group and you’re only a few, it’s best to regroup and form a plan. If you have to, simply abandon that node and head to another that is close to spawning. There will be times when a node is going to be lost and fighting for it is pointless.

Don’t just rush in blindly. Always keep an eye out on your surroundings. If an enemy is approaching and it’s just one, you can take the chance to take them out. Especially if you have your entire party with you. If they happen to start running away, don’t follow. Sometimes you’ll kill them before they can get away but other times they’ll be running to their team for heals. And that can end up turning the hunters into the hunted.

You want to be earning points, not losing them. Taking risks can pay off, other times it will come back to bite you. The more you play, the more you’ll figure out when you can take risks and when it’s best to simply walk away. There is no shame in running – if it means staying alive then that is all that matters.

Target the Healers
It’s hard to figure out which members to focus on first. Some times it’ll be best taking out a tank or a DPS. If there is a healer around, you will want to try and focus on them. Nothing is more frustrating than whittling down the enemy health only for them to have it back to full. Stun the healer and unleash everything you have. Show absolutely no mercy!

Experience with PvP will come in time. The more you play, the more you’ll figure out other little things that you can do to help you on your road to victory. Which brings me to my last little tip of this guide. PvP skills. They can be used in addition to your main skills and should not be overlooked. I’ve seen many players simply ignore these skills even though they can be quite useful.

Have fun and perhaps I’ll see you out there on the frontlines!