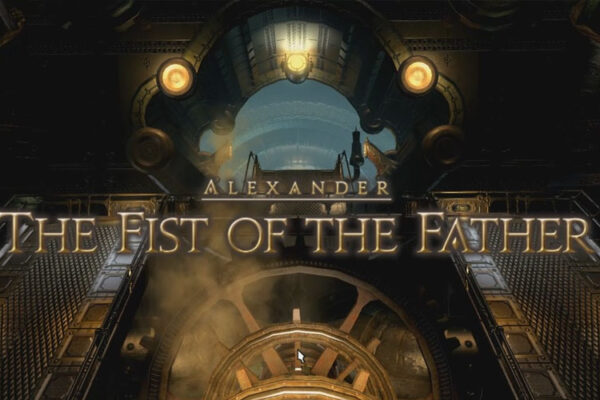 Welcome to the first flood in the Alexander Normal raid. The raid takes place in the Fist of the Father within the giant primal, Alexander. To get into the raid, you must be ilevel 170 and unlock a quest titled “Disarmed.” The quest giver is Slowfix, located in Idyllshire (X:7 Y:6).

There are two fights within this area with no trash mobs in-between. Just move through the arena and listen to that glorious soundtrack. You will come across the mini boss of the raid named Faust. This is pretty much a DPS race. Faust will spawn adds continuously(named Sturm Dolls), the more adds that are up, the more damage they deal until they overwhelm and destroy you. The off tank should pick up the adds while the main tank tanks Faust and the DPS should focus on Faust only.

Once Faust is dead, the adds will disappear, allowing you to move onward to the actual boss of the raid.

The Oppressor. And his clone, the Oppressor 0.5. Both have the same skill set which happens throughout the fight. The skills are:
Gunnery pod, unavoidable aoe that deals light damage to the entire raid. Just heal through.
Photon Spaser, targets a random party member with a line aoe, simply move out. When both Oppressor’s are up, be mindful that the lines can overlap so be on your toes.
Hydrothermal missile, targets a random party member with a red target above their heads. Hits around five times and hurts real bad. Especially with nano particle debuff/stacking HP-down and Vulnerability-up debuff. Shield and heal.
Resin bomb places four random aoe circles underneath party members, like the hydrothermal missile, these can overlap.

Go in, start the fight and wail on him a bit. For the first few moments, it’s really just the whole dance of tank tanks, healers heal and DPS well, they DPS.

The first person to deal damage to these adds will be tethered to them. This will cause the add to follow that party member until either the party member, or the add, is dead. This is an important mechanic for later on.

Killing the add will leave behind a pink puddle that will minimize anyone who steps in. Alarum adds also hits the tethered player with nano particles. Too many stacks = death so try and kill them before it gets too much.

After an alarm sounds, two blue lasers(the attack is called 3000-Onze Missle) will appear at a random location of the arena. They’ll turn red as a huge missile starts heading down that laser. Another alarm will sound, this time signalling four adds. Two adds per laser. Have the DPS get the adds and move them beneath the laser where they should be killed. The pink minimizer puddle will minimize the incoming missile and mitigate the damage.

If one missile hits, it’ll place a stacking HP-down and Vulnerability-up debuff. If both missiles hit, there is no surviving. This will happen periodically during the fight. You’ll know when by seeing the blue laser and hearing the first alarm sound. Second alarm sounds will be the adds.

After the missiles explode, there will be several seconds before both Oppressor’s jump away from the arena. Two circles will appear and pulse, signalling where they are going to land with their move ‘Quick Landing.’ Move away from the targeted side as the further away you are, the less damage you’ll take.

An important note is when the Oppressor’s are low in health and Alarum adds spawn, do not get greedy and try to kill the bosses. Sort out the adds and missiles because you don’t want to get close to killing the bosses and have the missiles hit, causing a wipe. It’s not worth shaving a few extra seconds.

If all goes well, you should be seeing this, along with the words Duty Complete:

Congratulations on your clear and for beating floor 1 of Alexander! You’ll be able to turn in the quest and take the next quest in the chain: “Steel and Steam” which unlocks The Cuff of the Father.

Did you guys enjoy the fight? Was it harder than you imagined or a bit easier? Did you go with your static when it was released or braved duty finder to have a taste of the new raid? What did you enjoy most about it? Let me know in the comments!