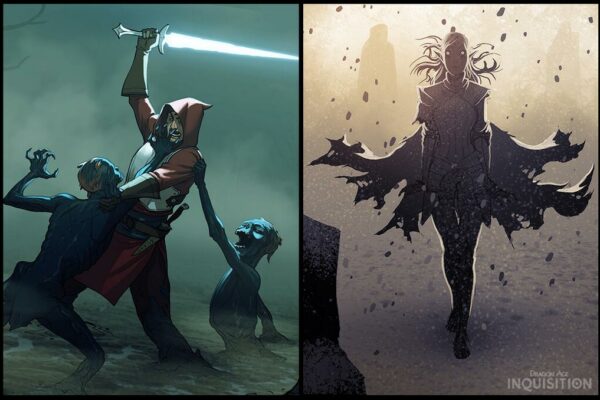 BioWare has just revealed two new concept images of Dragon Age Inquisition featuring the game’s protagonist, the Inquisitor. The image expose two individuals, one from each genre, displaying their skills. The male Inquisitor appears to be some kind of mage-warrior, using one hand sword powered by elementary magic (possibly light magic). The second image presents a female Inquisitor whose specialization is clearly a mage. Small rock fragments can be seen floating around her body; she appears to be casting a earth gravitational spell.

The enemies displayed in the first image might be a direct effect of the veil’s breaching. They appear to be some kind of undead corpses but they don’t resemble any darkspawn models seen in the previous two games. Instead, they seem to be magical summonings, demon souls descending on the grounds of Thedas.