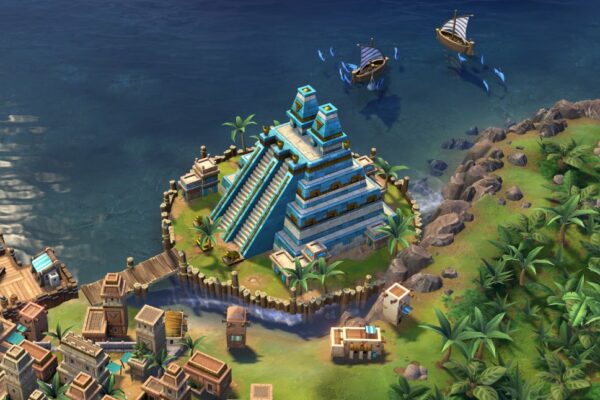 Civilization 6 is an extremely complex game and you could easily write a huge novel trying to create a complete strategy guide. But with gamers having limited time (and probably interest) to read hundreds of pages, we’ll try to sum things up in as few words as possible in our complete Civilization 6 guide that will help you win games. In this Civilization VI guide, we have tips, tricks and strategies that you should always use in order to build that amazing Civilization that will stand the tests of time.

You will quickly see that it’s all about planning and starting strong: a strong start will make things easier and even though you can still fall behind, chances are you won’t if you play it smart. But start on the wrong foot and you’ll lose the game sooner rather than later (or just struggle all the way to the end). We don’t want that to happen, so we’re here to share with you some Civilization 6 tips and strategies in our complete guide that’s mostly aimed at beginner players. But even advanced gamers might find something useful here, so read on and prepare for world domination!

1. It all starts with the beginning
Choosing a great leader and civilization is key to victory. Even more, understanding each civ’s strengths and potential weaknesses is extremely important as you will know what route to follow. Usually, all players have a favorite civilization or more: so make sure you pick the winning one. We have already shared the best 5 civilizations in the game – so make sure you read it and use it as a starting point or inspiration in case you need some alternatives.

A good strategy to block other civilizations from progressing or establishing diplomatic relations is to try and keep them away from the world. If the map permits it, try building cities that block access to parts of the world by land. A well placed city, for example, surrounded by mountains, can easily keep a civilization away from exploring and progressing. I found throughout the games that maps usually have these passes through the mountains which, if you can control them, give you greater powers over other civs.

3. City States are your Friends
Unlike your opponents where the closest should be considered your immediate enemy, the City States should work differently: consider them and try to make them your friends, especially early on in the game as you will have better bonuses and gains. Work with the closest and keep the relations solid because eventually you will make them yours! But until you do, reap on the benefits!

Districts are the biggest change and challenge, especially during your first few playthroughs as you don’t know everything about them. The adjacency bonus comes into play as well, complicating things a bit, but you should always build your cities with a plan in mind. Try to think over the ages and place everything carefully, considering future bonuses from future buildings and districts. Playing the game randomly or going for the immediate benefits won’t prove successful in the long run and you risk being left behind if you don’t plan out your cities carefully!

5. Trade routes are extremely important
I remember when I first saw the intro video, before the game was launched, that I laughed when I saw it presenting the main character and his trade caravan. “Who uses these?” I wondered, but as soon as I started playing the game, I understood that trade caravans and trade routes are extremely important. First, because for a very long time they will be the only way for you to build roads and your units to move faster on the map. And second, because they offer huge bonuses in the long run.

Yes, trade routes go with the same planning mechanics as the cities and everything else in the game. Remember that once you have established a Trading Post in a city, future trade routes going through the city will generate more gold. In other words, make sure to plan your routes ahead, starting with the closest city that’s on route to another city. Work your way to cities that are farther and farther away and soon the extra gold you’ll be racking from each extra Trading Post will make a big difference!

6. Get the Eureka moments for easy science progress
I often found myself delaying the research of a technology because I was close to getting the Eureka moment. It seems strange and it could backfire if not applied correctly, but this strategy is good in most cases. Just make sure that you work towards getting the boosts and reduction in research times with the Eureka moments – the early technologies are extremely easy to boost – and you’ll get ahead with your tech tree very fast. Research boosted technologies first and always consider the requirements for Eureka moments, but don’t make it your goal to get them all because that’s impossible. Pick your battles and go for the ones that are easy to boost!

7. Build a strong military early on
And by “strong” I don’t mean spamming warriors like most civilizations do. Take your time, be patient for a short while and as soon as you have something better than the warrior, start producing that unit in large numbers. Take advantage of any bonuses your Civ might offer (like the War Cart if you’re playing Gilgamesh, for example) and always think about the future: know which units upgrade to amazing mid-game and late game units and focus on producing those. Barbarians will be your main source of nuisance, generally, in early game, so deal with them first, while building the army for the future!

8. How to win Wars
You should always plan for war and at least be prepared to defend if you don’t have any motives to start wars yourself. Starting a war is serious business which could come with serious consequences, so always make sure that you are ready for it once you start it. This means having a solid military (ideally you should at least have an estimate of the troops the enemy has and build troops to easily defeat them), including siege weapons and range units. Always produce the strongest possible units, upgrade troops if you can and make sure you have some money put aside in case you need to quickly supplement your armed forces with a couple of new units.

Extremely important during war time is to keep your units alive: don’t hesitate to retreat if things get too complicated, but always try to destroy enemy units while keeping yours alive. Try to fight one one front at a time in order to increase chances and take advantage of any adjacency bonuses, generals or whatever bonuses you might have. Take advantage of the option to name your troops in order to know about their particular bonuses in combat. Have defensive troops on hand, ready to protect your offensive ones while they heal and always push slowly but steadily towards the enemy borders – the farther away you keep the battle from your cities, the better.

Have in mind that wars will take longer as you progress through the ages, so early game is extremely important if you’re war minded. Try to conquer at least one civilization with a minimum of 2-3 cities by the end of the Classical Age in order to have the number of cities required to produce and maintain a solid military. Then slowly work your way up, building troops and keeping them alive in order to succeed in battle!

9. Keep an eye on the AI players & agendas
The AI has some agendas in Civilization VI and they will more or less follow them throughout the ages. Keep an eye on those agendas and try to play according to them, taking advantage of those agendas that could prove to be beneficial for your own empire and taking out first the civs with agendas you don’t like.

Also make sure to always keep an eye on your opponents and see how close they are to victory. I will never forget a game I had against Saladin early on (yes, the Religious victory guy – I didn’t know that at the time) which was pretty much isolated from the world with just a few cities and no chances of accomplishing anything. When I checked, completely randomly, on him, I saw that he was close to grabbing the Religious victory because he turned his disadvantage into missionaries which I completely ignored, but spread his religion. Just several turns later I lost the game. So ALWAYS keep an eye on enemy civilizations and take measures against them if any measures are required.

These would be my tips and tricks for Civlization 6 players and hopefully these help you better understand the game and plan your moves ahead. There is, of course, a lot more that you should consider – smaller things usually – that complicate the game and make everything more fun and interesting. Covering them all would require thousands of words and we’re not ready to write novels yet.

But if you have any other tips and tricks or strategies that you think are extremely useful and worth sharing, don’t hesitate to let us know by commenting below!