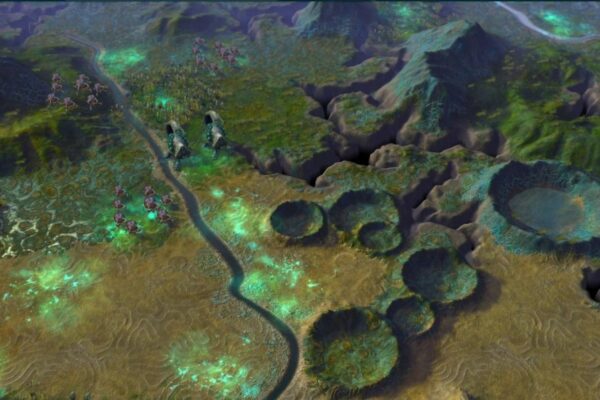 When I saw the first details about Civilization: Beyond Earth, I was both excited and worried. Taking a game that traditionally takes place in an universe extremely familiar to the player – Mother Earth – and completely changing the setting, introducing brand new, sci fi elements like alien technologies, alien creatures and topping it all with a brand new planet that seems to be a bit too green and foggy… not that’s a big risk! Taking people out of their comfort zone and throwing them into the unknown always is. But fortunately, the team behind Civilization: Beyond Earth does its best to create the perfect setting.

In a Q&A session over at the 2K blog, Lead Designers David McDonough and Will Miller said that they have a team of writers creating the “history” of the game, as well as all the fiction surrounding the new reality:

“We have had several writers working on the history and fiction of the game. It’s been a fun process because we get to make up everything as we go. We are no longer bound by humanity’s prewritten history. Like all Civ games, Beyond Earth will have a Civilopedia and lots of descriptive text throughout the game to give the player insight into the new tech, events, and planets.”

Further more, players will always have access to all the details explaining exactly what happened (well, except for the “Great Mistake” that caused the end of life on Earth, that seems to remain vague) so they will not be thrown into a completely different world, not knowing why their cities can produce stealth tanks that look like chameleons (the unit is just part of my imagination, probably the game won’t have it).

Asked what sources of inspiration were used to create the futuristic back-story of the post-apocalyptic Civilization game, the lead designers said that they read everything that mattered: “We read through stacks and stacks of the best sci-fi books for inspiration before we even started development on the game. We read everything: Isaac Asimov, Arthur C. Clarke, Ray Bradbury, Robert A. Heinlein… we could go on for a while. Researching for Beyond Earth was an incredibly enjoyable point of the development process.”

So, as far as the background goes, it appears that there is a solid basis for Civilization: Beyond Earth and even though we won’t get our chance to build up new nations on familiar grounds, we’ll have all the data required to understand everything that happened, the reasons why we’re there and why there’s no stealth thank that looks like a chameleon in the game.