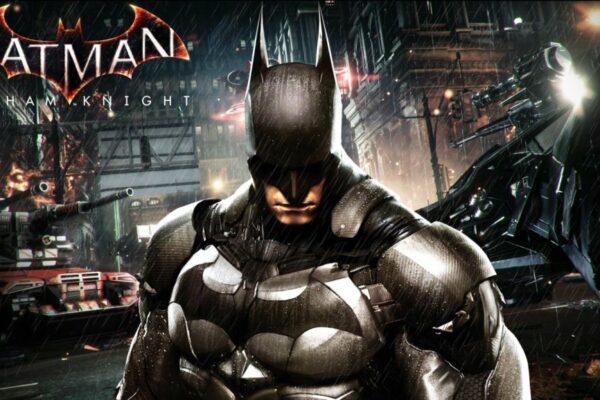 Let me make something clear right of the bat (no pun intended) – “Batman: Arkham Knight” is not a bad game by any stretch of imagination. In fact it’s a well-made, and most importantly, fun experience, with some good elements in it. But not something that I and some other gamers out there would call a great one due to one simple fact: “Arkham Knight” does not innovate substantially and where it implements something new, it doesn’t do it well enough to make it a revolutionary game that two previous installments from Rocksteady studios were.

That of course only true if we dismiss the catastrophic PC-version optimization, its launch and the entire debacle surrounding it. But since it’s been removed from digital stores and the publisher suffers because of it financially, I would call this one karmically even. Yes, the PC-players pretty much got screwed over, but at least they can take solace in the fact that the people who let such thing happen are getting the kickback from the entire gaming community with every passing second. Not much, but it’s something. 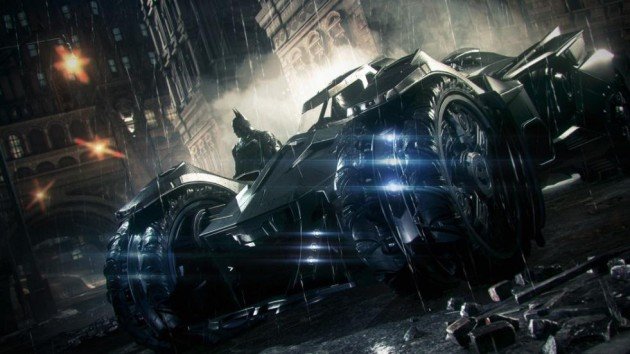 The most controversial subject about latest Batman-game is obviously the Batmobile. People who criticize it say that it controls horribly and is shoehorned in every part of the game. That statement is justified, but only by 35% and here’s why. Let’s start with the main function of the Batmobile – getting around the city. And that it accomplishes absolutely marvelous. Not only because it’s clear that the city was designed to accommodate driving, with various twists and turns, and hidden routes. But also because of the way the car feels: it has weight, it has momentum. And you actually need to take into consideration those two aforementioned features if you intend to be somewhat good at driving, which also keeps it from feeling routine. Piloting Batman’s vehicle is not just dumb arcade, monotone instance and that one of few aspects that I absolutely love about the entire game. 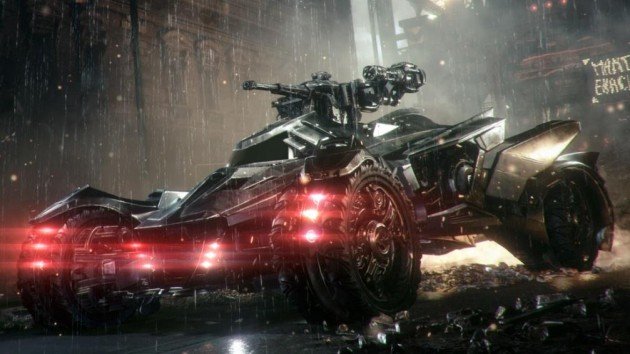 But traversing the city is only half of the entire function of the Batmobile. The other half is his implementation in other areas of the gameplay. And here is where I say that it only partly succeeds. I do not mind the drone fights or the puzzle solving using the car, they are fun and even inventive in their own way. But only when they are kept at a reasonable amount. It should be a little distraction, like a mini-game. Than it completely works. But when you start embedding the Batmobile drone fights as a constitution for a boss-battle that is when we have a problem. Because suddenly it turns from “being the Batman” and facing your arch-enemies as one with your own bare hands to “being the Tankman” and shooting them with a bloody gun while they shout insults at you through the radio. And these intrusions permeate the entire main campaign and even some of the side-quests, which is one of the reasons that I am disappointed in “Arkham Knight”. 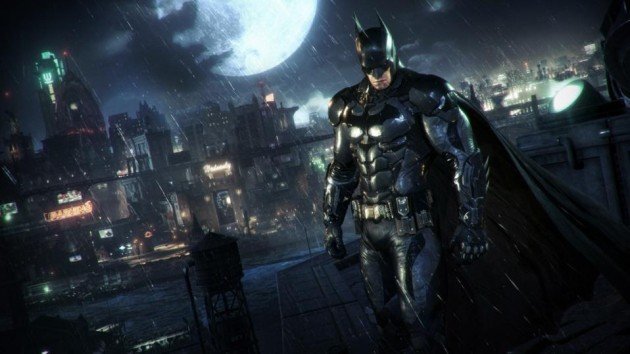 The other big crack in Rocksteady’s new Batman game is the way it is structured. All the events happen during one night, again, just like they did in all previous installments. Yes, some tweaks have been made to shape a more cohesive experience. Like for example a commentary from the characters on whenever Batman takes on the side-quests. And the entire story, including the secondary objective missions doesn’t feel as discombobulated as it was in “Arkham City” and “Origins” (yes, I am counting even that one). But still, we, again, need to turn to our willing suspension of disbelief to not only keep an open mind to the fact that the caped crusader doesn’t kill anybody driving the Batmobile or when entering battle-mode, but also that the entirety of the story takes place in one night.

This is the point when I think it let me down personally the most. I’ve already seen that done two times in an open-world. Granted, “Origins” was not as good as “City”, but that is exactly my point: they’ve exhausted any residual momentum of the gimmick “Batman in a big city” with the WB Montreal prequel. Gotham is much more beautiful, detailed and vertical this time around. And I even would dare to say is absolutely stunning. There are a lot to explore and a lot to traverse. You can see how much care was put into each nook and cranny. But there is nobody on the streets except criminals, again. No sense of presence, that the “Batman: Arkham Origins” was missing as well and one of the reasons it got pummeled so hard by gamers and critiques alike. 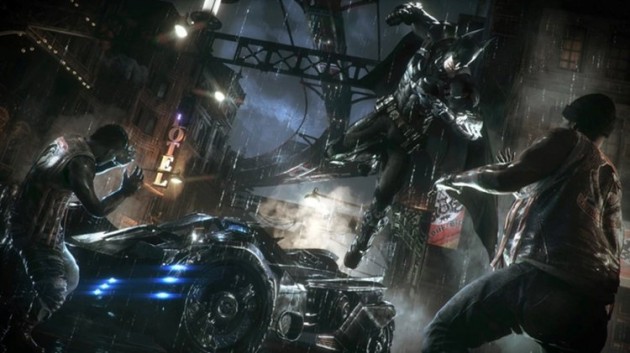 By this point the gimmick “Batman in a big city” should only be expanded upon, not just merely recycled. Imagine a game with an idea of “Batman in a big living, breathing city over many nights”. Honestly, I think that’s what it takes. Just give the players the opportunity to actually live as the Dark Knight day after day without the constrictions of one particular time limit and you got your innovation that “Asylum” and “City” exhibited throughout, with former giving us the first actual chance to “Be the Batman” and the latter presenting us with the opportunity to “Be the Batman in a big city”.

So, if the main framework of this game at this point is formulaic why is it still good? Because as I said above the Batmobile ultimately works as a mode of transportation and at times as a secondary gadget, when, of course, not being forced down the players gob. Even though Gotham is populated mostly by criminals it is still alive enough, magnificently designed, beautifully looking and interesting for you to explore. The combat and predator encounters are as good as they are ever going to be and fun to play. Although I’m certain the developers can improve upon them even more if they want to. There are plenty of side quests for you to complete which is to say there’s plenty bang for your buck. Although the price of season pass is absolutely unacceptable and shouldn’t exist at all, considering there are games that offer even more content for the exact same cost without the necessity to pay for additional DLC that lasts about an hour.

The story is one of the best Batman stories ever told. Period. I’m serious. Yeah, they really mislead us about the Arkham Knight’s origin, but other than that every character in the campaign, including the aforementioned Knight, works incredibly well and add something to the story. I especially like how the Batman is portrayed not just as a perplexed vigilante, but as a somewhat bastard at times and an actually conflicted anti-hero which I absolutely love to see. It all comes to a satisfying conclusion with an exciting horror-first-person gameplay twist at the end which raps up all loose story ends from the “Batman: Arkham City”. And everything above is complemented by a great-looking graphics and overall solid performance on the consoles. 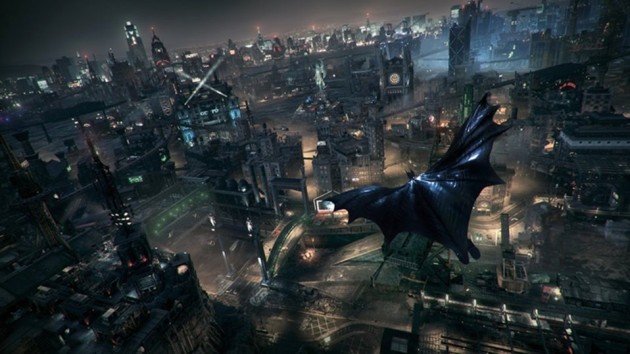 There is a big difference between being a bad game and being a disappointing game. The former can happen due to many reasons: bad mechanics, incomprehensible storyline and so on. While the latter most of the time occurs due to the fact that you can see all the parts of a great game in place, but they are just not working in tandem or simply are wrongfully implemented. And that’s what I think is wrong with the latest Batman outing. The story, the characters, the city and even the Batmobile at times function incredibly well, but the stale formula and some questionable gameplay design choices subtract from what could have been the difinitive Dark Knight fantasy. And although not necessarily beeing a transcending product this time around, developers at Rocksteady studio still have done a good job and accomplished in creating what any game should be – a fun experience . That is why and all the reasons meantioned above I would still recommend “Batman: Arkham Knight”. Do not expect something revolutionary, but be prepared, possibly for the last time in quite a while, to be the Batman.