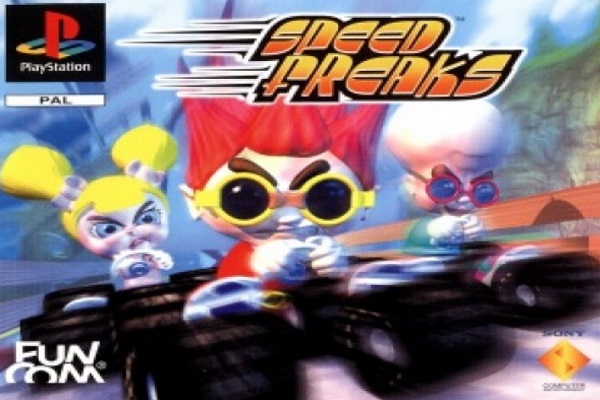 After Super Mario Kart, the kart racer became a thing. An utterly immense, ridiculously size-tastic THING. In a manner akin to the Doom clones, everybody was suddenly at it. Even the Crazy freaking Frog got himself a toontastic racer.

Predictably, few could hold a candle to Mario Kart. There were some high-profile clones that were worthy rivals, though. Crash Team Racing in particular is the big one for me. Then there are the more obscure releases, which offer up some cult kart-racery of their own. Step forward, Speed Freaks.

This one hit the PlayStation in 1999, from FunCom Dublin. It had rather crappy working titles (Wheelnuts, you say?), Jamiroquai’s Travelling Without Moving playing in the intro movie, what’s not to like?

Unusually for the genre, there are no familiar mascot characters to play as here. You choose from a roster of six original personalities, with a further three unlockable later. They’re not the most inspired bunch, with hackneyed punk guys and racing-obsessed little dudes in motorbike helmets among them, but it’ll do. They’re a friendship group, and the character select screen pans around their clubhouse of sorts. It’s a fun little touch. 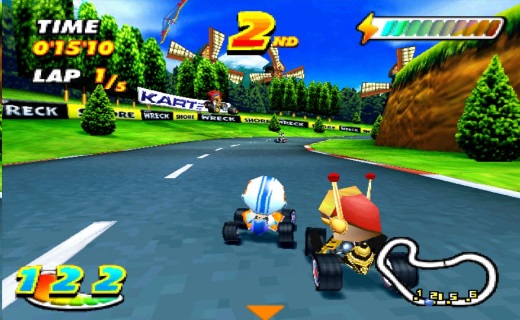 But naturally, fun little touches are the mark of the kart racer. This is no tediously sim-y Gran Turismo. Power-ups will fly, rockets will wang friends in the face on the final stretch and assorted swear words will ensue. Speed Freaks is no different, it has a full complement of genre staples. Homing missiles, little puddles of… something to lay on the track and cause opponents to spin out, bombs, you know how these games work.

The tracks are varied and deftly designed, and it’s a pleasure to cruise around them. Here, too, FunCom are playing it safe, with all the familiar tropes from busy highways to jungle tracks accounted for. But this isn’t to say that Speed Freaks isn’t its own game.

Perhaps the best little innovation here is the speed boost mechanic. Alongside the pick-ups, boost tokens are strewn about the track. Collecting these gradually fills a meter on the HUD, and it’s up to you how to manage what you’ve accumulated. You use your boosts for as long as you hold the trigger, allowing you to opt for one long burst of speed or several more controlled ones. Saving it up will grant you a more pronounced effect, which is something else to consider while you’re racing.

It’s a system I haven’t seen implemented quite this way anywhere else, and it’s so effective during play.

Speed Freaks is quite conventional at its heart, as we’ve seen. It has the familar crop of time trial and tournament game modes, too. But it does what is does so much better than most pretenders. An underrated title (if you’ve heard of it at all) from the heyday of kart racers.

Follow us and get the latest news delivered to your timeline!
PlayStationPS1SonySpeed Freaks
Previous ArticleBest Coaches in Football Manager 2015 (Free to Get)Next ArticleHow to Fix Call of Duty Advanced Warfare Crashes, Freezes and Other Errors