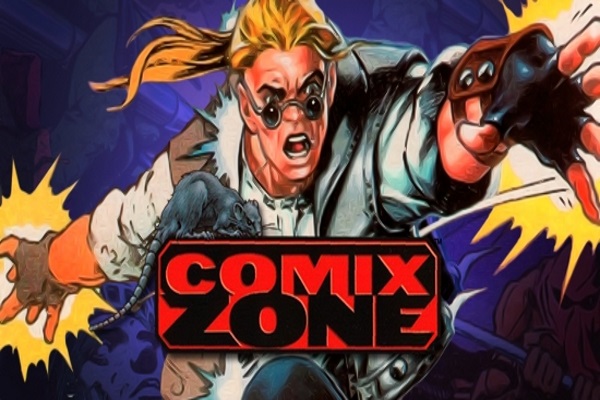 Oh yes indeed, gals and guys. This is many of our childhood dreams come true, right here. Buckle up.

In the mid-nineties, before MC Hammer went bankrupt and we realised just how crap Will Smith’s fluorescent Fresh Prince of Bel-Air outfits were, this was the ultimate fantasy: being sucked into our own comic book and becoming its hero. We’d battle monsters of our own creation, with weaponry we drew ourselves. General greatness would prevail.

And so it did. Meet Comix Zone.

This brawly action platformer hit the Mega Drive in 1995. It’s the toontastic tale of Sketch Turner, a cartoonist who finds himself in that very predicament. One stormy, impending-doom-y night, lightning strikes the page as he draws. In that instant, the comic’s villain, Mortus, is able to escape into the real world. Needless to say, this is all kinds of not good.

And so we take the role of Sketch, trapped in the panels of his comic and assailed by all manner of ghastly flesh-things. It’s going to be a bumpy ride.

Every inch of Comix Zone is true to its brilliant premise. Levels proceed through page panels, each attack and hit gives a Batman-esque Pow! or Sock! or other terrible effect, and the characters’ speech is in speech bubbles. It looks brilliant, with some of the best 2D art the console could muster, and the music is suitably jangly.

But nuts to presentation, what of the gameplay? It’s simplistic but a lot of fun, a combat-centric experience with some light puzzle solving and platforming to be done. There’s some nice variety in the stages and mutant opponents therein, and a clever inventory system that makes it easy to utilise the selection of bizarre gadgets and weapons you’ll pick up.

Comix Zone is a short experience, but certainly an enjoyable, challenging and inventive one. It was released at an unfortunate time, which really doomed its chances at sales-tastic success. Still, in the almost-decade that has passed since, it has cemented its reputation as a cult classic. Definitely one of the Mega Drive’s hidden gems.

Follow us and get the latest news delivered to your timeline!
Comix ZoneGenesisMega Drivesega
Previous ArticleFIFA 15 Ultimate Team: How to Make a Lot of Money EasyNext ArticleThe Six Biggest Missed Opportunities In Destiny