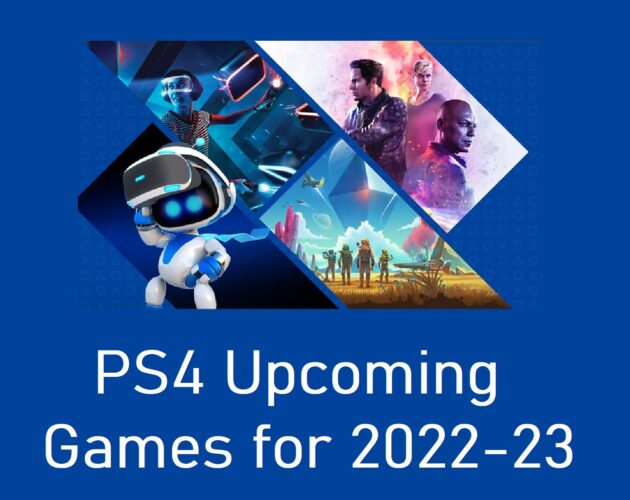 When PlayStation releases their newest console, the PS4, they always have an impressive list of games that will be coming out on it. Great graphics, high-quality sound, all with intense and frantic gameplay. These games can make you feel like part of the team. Several new games are in development for the PlayStation 4. This blog post will list 20 PS4 upcoming games that are set to be released between 2022 and 2023 for your personal viewing pleasure!

Horizon forbidden west is an upcoming role-playing adventure game. It was designed by Guerrilla games and released by sony interactive entertainment. It will be launched for the console of PlayStation 4 and PlayStation 5 on February 18th, 2022. This game follows up the storyline of the horizon zero dawn with additional features and modes.

An upcoming shooter game, Rainbow six extraction, was designed by Ubisoft, and its development is by Ubisoft Montreal. This is one of the PS4 upcoming games, but it will also be released for other platforms like Xbox One, Xbox Series X, PlayStation 5, and Series S. It is a multiplayer video game in which players function in a set of three to fight against the new Version of aliens.

Gran tourism 7 is an upcoming single-player racing game. It was created by Sony Interactive Entertainment and released by Polyphony Digital. It will be launched for PlayStation 4 and PlayStation on March 4th, 2022. It will come up with interesting features for racing like championship mode, advanced race tracks, weather effects.

Saints Row is a single-player forthcoming action video game, with which the designer is Volition and THQ and Deep Silver is the publisher. Its release date is August 23rd, 2022, for the platforms Xbox 360, PS3, PS4, PS5, and Linux. In this, players explore the game world by walking or driving and complete different tasks like driving a vehicle or shooting for completing the game.

Elden ring is an action video game upcoming on February 25th, 2022. Software created the game, and it was released by Bandai Namco Entertainment. This game is a collaboration between a Japanese developer and the author of the game throne. This can be played on the platforms, PlayStation 4, PlayStation 5, Xbox One, Xbox Series X, and Series S.

By designing and developing French studio Sloclap, sifu is an action and adventure single-player video game. Its release is February 8th, 2022, for not only PS4 but also for PlayStation 5, Microsoft Windows.

Gearbox Software created and 2K Games published the shooter video game Tiny Tina’s wonderlands. It is a multiplayer video game with shooting and adventurous features. On March 25th, 2022, the game will be released for Xbox One PlayStation 4, PlayStation 5, Xbox Series X, and Series.

Monark is one of the PS4 upcoming games based on action and adventure. It was developed by Japanese developer FuRyu and released by Nippon Ichi Software. It will be published for PS4, PS5, Nintendo Switch, and Microsoft Windows on February 25th, 2022.

Mortal Kombat X is a fighting video game for PC, PS4, and Xbox One. This game was released on April 7th, 2015, by Warner Bros. Interactive Entertainment and developed by Nether Realm Studios.

Dynasty Warriors 9: Empire is an upcoming action, fighting, and thriller video game created by Omega Force, and the publisher is KOEI TECMO AMERICA Corporation. It will be launched for the platforms PS4, PS5, Nintendo Switch, Xbox One, Xbox Series X and Series S, Microsoft Windows. Its launch date is February 22nd, 2022.

Martha is dead: an action, horror, and thriller video game based on reality and superstition. This was created by LKA and published by wired productions. The game is ready to be launched on February 22nd, 2022, for the consoles PlayStation 4, Xbox Series X and Series S, Microsoft Windows, PlayStation 5, Xbox One.

Code masters developed, and Electronic Arts published Darkest GRID Legends. It is a multiplayer racing video game that can be played on PS4, PS5. Xbox Series X and Series S, Microsoft Windows, Xbox One. The release date of the game is scheduled for February 25th, 2022.

An action, adventure, and shooter video game, ELEX II, will be launched on March 1st, 2022. It is designed by Piranha Bytes and published by THQ Nordic. It will be played on the consoles, PS4, PS5, Xbox Series X and Series S, Xbox One, and Microsoft windows.

Dragon Ball: The Breakers is an action, adventure, fighting, and shooting video game. It will also be played on the PS5, Nintendo Switch, Xbox Series X and Series S, Microsoft Windows, and Xbox One. It was developed by Monolith Soft, and publishers are BANDAI NAMCO, Namco Bandai Games America Inc. It will release in 2022 year.

Canadian studio KO_OP created and published the action-adventure video game Goodbye Volcano High. The game mode is single-player. The launch of the game is expected to be in 2022 for Xbox One PlayStation 4, PlayStation 5, and Microsoft windows.

Resident Evil Re: Verse is an online shooter video game consisting of 4-6 players to be played. Capcom is the designer and developer of the game. The launch period of the game is scheduled for 2022.

A shooting video game; sniper elite 5, was created and published by Rebellion Developments. One of the PS4 upcoming games; sniper elite five, is coming in 2022 for the consoles, PS4, PS5, Xbox One, Xbox Series X, and Series S.

Follow us and get the latest news delivered to your timeline!
PS4 upcoming gamesupcoming games for 2022
Previous ArticleTake-Two acquires Farmville developer Zynga for a staggering $12.7 billionNext ArticleThe best indie games for 2020