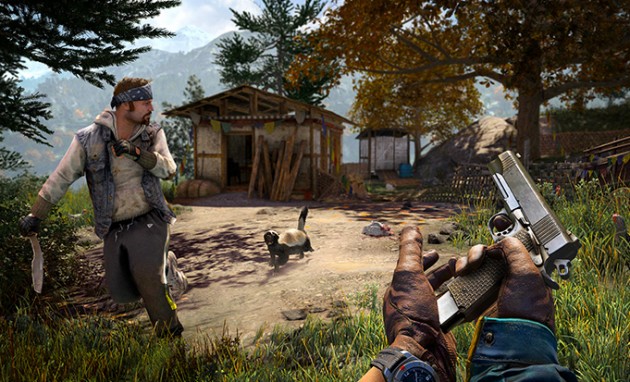 One of the best-looking games at E3 this year, Far Cry 4, has been shown off on Twitch for the few lucky enough to get their paws on it. EatMyDiction of Youtube and Twitch fame has uploaded over two hours of gameplay, showing both new and old mechanics. Today we shall discuss Far Cry 4 Gameplay.

If you’re like me, you definitely want to shoot many a foe with an M60 while atop an elephant, and you can do it in Far Cry 4, I promise! Simply click the link below to be taken to the ultimate in Far Cry 4 streams. Far Cry 4 with EatMyDiction

Far Cry 3 was an absolute pleasure to play, and Far Cry 4, with all of its silly nonsense, is looking to take the helm as the most exciting new open-world shooter.

Ajay Ghale is the main protagonist of Far Cry 4. Ajay travels to Kyrat to fulfill his mother’s dying wish for her ashes to be spread somewhere in Kyrat. He quickly becomes involved in a brutal civil war against the oppressive and less leader of Kyrat, Pagan Min. After two choices, Ajay becomes Pagan’s successor as the King of Kyrat. This is all about Far Cry 4 gameplay.