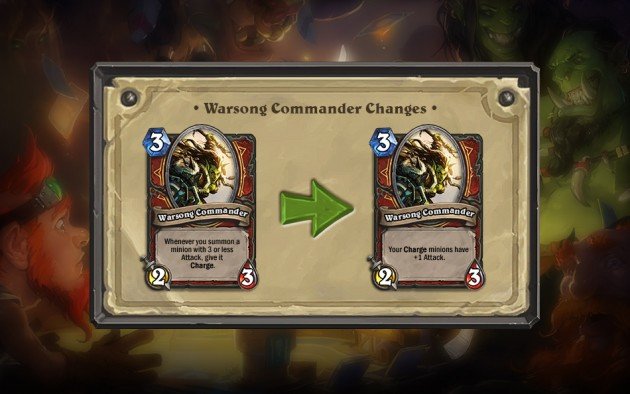 Patch 3.2.0.10604 has just gone live for Hearthstone.  As usual, the patch has fixed various unlisted bugs in the game.  The biggest change is the addition of Japanese localization, opening the doors for countless new players to join in on the action.  It has also added the Highmaul card back into the game files and it will be given to any and all players who reach rank 20 or higher this month.  However, the change that has everyone talking is a highly-demanded balance change for Warsong Commander, changing her effect to buffing your charge minions rather than granting charge to minions with 3 or less attack.

Many players having been begging for a nerf of some kind ever since the Blackrock Mountain expansion released earlier this year.  The new Grim Patron card that it introduced proved to be extremely powerful in Warrior decks when paired with Warsong Commander, Frothing Berserker, and Whirlwind.  The resulting Patron Warrior deck quickly became one of the strongest combo decks in the game with only Handlock proving a formidable match-up against it.  Much like Miracle Rogue before it, the weakness of the deck comes more from your opponent not knowing the best plays and making a mistake rather than you outthinking them yourself.  Patron Warrior has been unavoidable on ladder and every tournament player has had the deck at the ready.  Removing Warsong Commander’s ability to grant charge makes sense as the effect has always been exploitable.  In the original version of the card, she simply gave all of your minions charge and getting out two Molten Giants with that effect was devastating.  Cutting out the stream of charge minions entirely not only disables Patron Warrior, but also future-proofs the card for future expansions and ensures that a similar deck won’t become dominate in the future.

Sadly, the nerf to Warsong Commander can be seen as excessive due to its stat line being kept the same.  Only buffing minions with charge is an incredibly situational effect that is unlikely to yield great results, even in a deck built around the effect.  In order to be worth playing, she would need a fair stat line to make up for her underwhelming effect, and a 2/3 for 3 mana is pretty bad.  Compared to cards like Dire Wolf Alpha and Raid Leader, cards that rarely see play themselves, Warsong Commander undoubtedly comes up short.  One last issue with the nerf is that Warsong is a basic card that all players receive for free, so those who went out of their way to build a Patron Warrior deck won’t be able to refund this one key card for arcane dust in the way most other nerfs are treated.  Fortunately, because Patron Warrior is a cheap deck to build and the rarer cards it can run will still be just as viable, it’s unlikely that this change will set anyone back.

What are your thoughts on the latest changes to Hearthstone?  Are you glad to see Patron Warrior go, or are you already reminiscing on the days where everyone would get in here?  Are you more interesting in the Japanese localization of the game, or are you really excited to get your hands on the Highmaul card back?  Leave a comment below and let us know what you think.

Follow us and get the latest news delivered to your timeline!
BlizzardCCGHearthstoneJapanTCGWarriorWarsong Commander
Previous ArticleWhy Does Hearthstone Have Adventures?Next ArticlePredicting the NX Launch Title Line Up