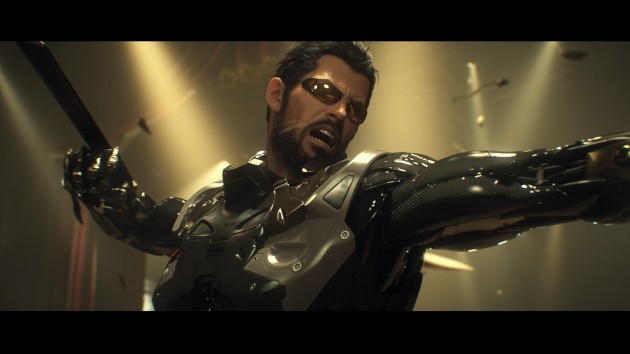 Square Enix and Eidos Montréal have released an extended 25-minute demo for Deus Ex: Mankind Divided gameplay. The demo was originally shown behind closed doors at this year’s E3, but the video is now available to the public.

The E3 demo offers an extensive dive into the dark world of Deus Ex, revealing multiple new features, characters, augmentations, and weapons in the game, alongside commentary from Executive Audio Director Steve Szczepkowski. It showcases various stealth and action options that Adam Jensen can utilize in his mission to unravel a vast worldwide conspiracy.

The 25-minute gameplay demo can be viewed below. Deus Ex is planned to launch in early 2016 on Xbox One, PS4, and PC.

I really like the updates on the character animation quality. In the last game a lot of them were very strange looking and eventually became recycled many many times, making it goofy. But, the character interactions and animations look very fluid and realistic.

Man this Game looks good, not in a “mmm I love your chromatic aberration girl!” boorish kind of way (not that stuff isn’t important), but that it looks like a lot of thought went into making everything look distinct and interesting.

Following the outcry, the Deus Ex developers have officially announced their cancellation of the service.  Instead, all customers who pre-order the game or purchase the Day 1 edition will receive all of the promised pre-order perks with the exception of the early release, which has been revoked entirely.  The removal of the early release makes sense as many feared that internet trolls would use their early access to post spoilers for those who didn’t opt into pre-ordering.  What are your thoughts on Augment Your Pre-Order being canceled?  Has it affected your desire to pick up Deus Ex: Mankind Divided in any way?  Leave a comment below and let us know what you think.