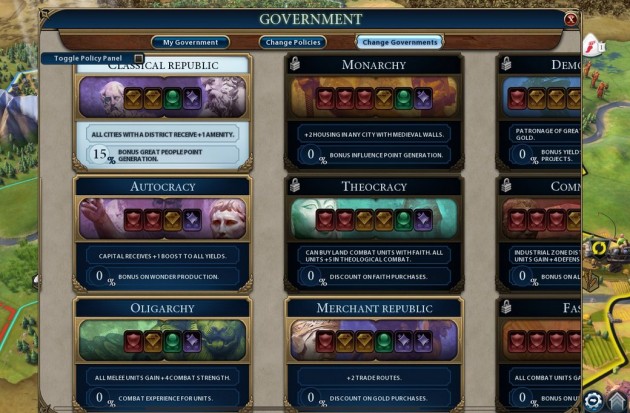 With 10 different government types available in Civilization 6 and 100 policies to choose from, it’s pretty obvious that there are a lot of options for you to choose and create the best government for your civilization. The truth is that there is no single type of government and set of policies that can be considered the best, as it usually depends on what type of game you play and what type of victory you’re trying to get. But it surely is true that some are better than others in most cases, as well as more fun to play.

And I am here to share with you my thoughts on the best government type in Civilization 6, knowing that it can be more or less adjusted depending on your type of play style. Since there are basically two big types of governments in the game (economic or militaristic), it’s a bit easier to decide which path to take in the long run. And always remember that policies are there just to be changed and adjusted based on your needs: there’s little point to have the same policies active when you are at war AND when you’re trying to quickly develop your civilization!

These being said, let’s find out which is the best government type in Civilization VI to have a fun game and an easy win!

Basically, when choosing the right type of government in the game, the choice should be made based on the number and types of policies it allows, rather than the bonuses that particular type of government offers. In other words, if you choose Fascism, you don’t choose it just for the extra attack strength and bonus production Legacy bonus, but also for the four military policies that you can adopt and two wildcard ones. And yes, this would usually be a very good choice for a militaristic play.

So these being said, let’s first find out everything about the government types in the game and what types of policies the allow, as this is extremely important and having an overview is vital:

As you can see from this, it doesn’t hurt to try and switch governments early on in order to try and get the legacy bonus or as much of it as possible, as the Legacy Bonus is permanent and follows you through the ages. So a good strategy could be to first get the Oligarchy government for at least 5 turns to ensure that your units will always get at least 5% more XP, then switch to Classical Republic, then to Autocracy. It’s a bit more difficult to do the same with future government types, but these early bonuses can be easily obtained and they will help a lot in the long run.

But afterwards, what’s the best government type to choose?

In my opinion, for mid-game, the Merchant republic is the best because of the extra money you’ll get, plus the option to spend them on cheaper units (so you won’t completely neglect your military). Having two wildcards is also good, since you can boost your military even more if you need to. Overall, this is clearly my favorite during mid-game.

When it comes to late game, things get a little bit trickier as they are all pretty balanced and more specialized. Fascism is great if you’re military-minded, but Communism is great as well. If you’re trying to get other types of victory, Communism also looks nice, but you could make Democracy work. I would personally choose Fascism at all times simply because I get the bonus to unit production and two wildcards to boost economic growth as well.

What is your opinion, though? Which is the best government type to choose in Civilization 6 and what route is the best to follow?