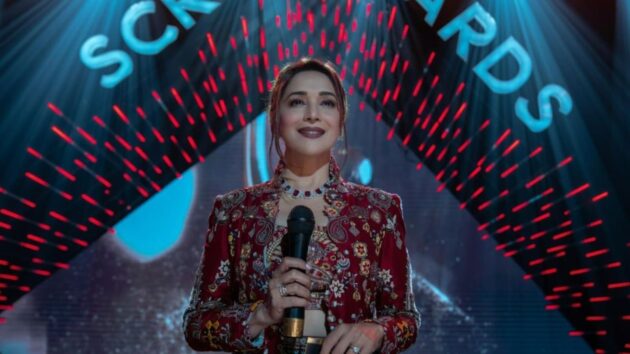 The story of “The Fame Game” revolves around a Bollywood diva Anamika Anand. The world is at her feet since she is an unrivaled superstar played by Madhuri Dixit Nene. She believes that she dominates her world, but she is unaware of the fact that she is nothing more than a puppet for her family. She failed as a mother and a wife as all she was concerned about was herself and the fame she had gained.

In the pride of her fame, she forgets that nothing lasts forever. As long as you’re young and beautiful, you’re in the game, but you lose your value in showbiz over time. So that story starts with her vanishing one bright day, and now the hustle begins to find her. But who is Anamika? And is she even important? That’s the tale. It is a family watch, a decent thriller, and a mystery. However, continue reading if you want the fame review in detail.

We all know about celebrities’ shadowy side, which we’ll receive throughout the series.

The series has eight episodes, each 45-minutes long that feature familiar celebrity life cliches, such as affairs, controversies, money troubles, stalkers, family concerns, difficult childhoods, and other actors influencing the life of a celebrity. However, I must say that Rao and his writing collaborators Shreya Bhattacharya, Nisha Mehta Amita Vyas, and Akshat Ghildial have created a screenplay that is incredibly captivating. The main superstar actor and a host of intriguing supporting actors receive the best performances from directors Karishma Kohli and Bejoy Nambiar.

The Fame game review: How does the story develop?

Let’s begin with the Fame review; the storyline begins with the Bollywood actress Anamika Anand, played by Madhuri Dixit, vanishing after the awards ceremony as police inspector Shobha (Rajshri Deshpande) examines the case with a noticeable hatred for the Bollywood milieu. The episodes don’t go smoothly like a typical storyline; they cut back in past and then in present time, subjecting Anamika’s past life little by little while obscuring her present so that we can connect how the character has developed to her current personality. As she learns more about the actor’s past, Shobha’s distaste for the flash and glamor of Hollywood gradually changes into a reluctant and warm regard for her.

Nevertheless, is Anamika who really desires the public and Shobha to believe? The writer has built her as a person who seems perfect in all the senses, who’s idealistic but has a void inner self which makes her friendly demeanor initially mysterious. She is obviously upset about her marriage, her domestic issues, damaged relationships with her kids, and the list just goes on. Whereas on the work aspect, it does seem sensible that the woman smiles and keeps going. But it’s puzzling that she hasn’t snapped in private. In the latter few episodes, as her character flashes her teeth, we understand why Madhuri still has it.

The Fame Review: Other leading roles

Lakshvir Saran and Muskkaan Jaaferi, are the two other main leads of the series who have played the role of Anamika’s troubled, depressed children. Both of them go with Dixit one to one in many scenes.

Lakshvir Saran and Muskkaan Jaaferi, who play Anamika’s unstable, sad children, are the two other standout performances of the Fame Game series. In several situations, the two young actors face off against Dixit, and they carry their own admirably.

Saran portrays Avi, who faces a variety of real problems, including a tumultuous relationship with the mother. In the Fame review, where we have discussed the characters, many are either cunning or shallow. But, among them, Avi is actually one of the most affecting features. Avi is an intense, sensitive man.

The Fame Game heavily emphasizes the traumatizing effects that parents’ behaviors have on their children. The connection between young Anamika and her controlling mother, Suhasini Mulay, is a major plot point. The mother of Anamika is a total monster; she made her daughter participate in the movie industry when she was hardly an adult. Suhasini was in charge of Anamika’s life and profession from a young age, and she had no intention of giving that authority up.

Sanjay Kapoor plays Anamika’s unscrupulous movie producer spouse Nikhil in their first collaboration with Dixit in twenty-five years. In Lust Stories, Kapoor repeats a portion of his role from the excellent Dibakar Banerjee film. Nikhil switches between being genuine and dishonest. He mishandles Anamika’s money and frequently hides from his wife about his purchases and investments. The mother and her husband, the duo of them, are enough to make Anamika insane all by themselves.

Then there is Manish, a famous actor who once was with Anamika in a romantic relationship. Months before Anamika goes missing, Manish re-enters her life, making him come on the list of suspects. However, the separated actor still desperately wants Anamika in secretly.

Summing up the Fame Review here as we believe enough information is provided. Now go and give it a watch yourself; you’ll love it for sure. Madhuri Dixit’s personality dominates the show and, accompanied by excellent supporting performances, makes the series a fantabulous watch. But, of course, the writing ultimately makes The Fame Game succeed, and now we are curious to learn what happens next in the upcoming series.