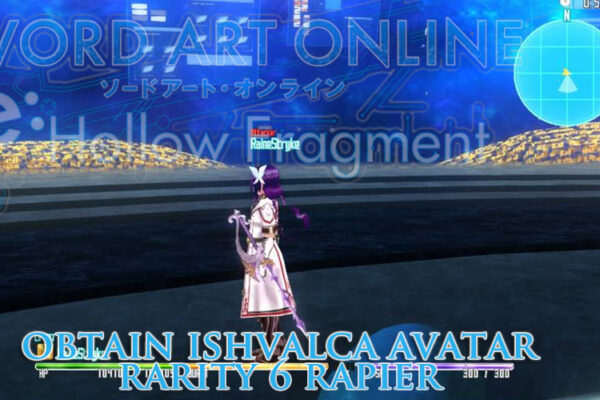 In this guide we’ll be going over how to obtain the rarity 6 rapier weapon, the Ishvalca Avatar. This weapon is rewarded as the Last Attack bonus from fighting Princess Ishvalca in the quest The White Empress. It’s a rank 3 mission and advanced which means it’s not going to be an easy battle. Thankfully there is no time limit but there is a recommended level of 230.

Weapon Stats
The Ishvalca Avatar has the following stats: Attack+50, AGI+100, ACC+30. DPS is 540 with a damage value of 630. This weapon also has an additional effect of CRT up. Yes, this weapon is able to be upgraded.

Recommended Level VS Actual Level
I mentioned it has a recommended level of 230. This just means the game recommends you to be 230 because you’ll be able to hit and survive a little better. However, I was level 187, Asuna was 184, and I had two other players. One was level 180 and the other was lower in the 150 range. We had some close calls and on the second round, we ended up all getting incapacitated.

Ishvalca
If you’ve done the arcane skill quest you will recognize Ishvalca. Sort of. She’s just a recolored version of the final boss you face for the arcane weapon skill. Also, she’s much more harder. Remember the protector armor buff? Use it before engaging. Co-ordinate with the others as to who will use it first, second, third and so on. If you have four party members then you can pretty much spend the entire battle under the buff.

Allow her to do her attack as she will then move. After she moves, unleash your strongest attack. Use arcane skill or chain OSS if it’s unlocked. After this, you want to attack her while she is attacking because you should be invincible with the buff. Just be sure to keep an eye on the buff and when it runs out, move out of the way.

She has two attacks that deal insane amounts of damage. One is a sword attack that hits several times while stunning. The other is calling forth a sword that remains in place(and is both target-able and kill-able) before exploding after a set amount of time. If you’re wondering what wiped my party out the second time it was that sword explosion. Our buff ran out and we didn’t move, thus we got destroyed.

Some of her attacks cause the bleed debuff which can be dispelled with purifying flames or purifying crystals.

Like many bosses, she does like to move around. Be sure to time your attacks so they hit before she moves, or during her attacks when you’re invincible. There is nothing worse than activating a skill and her moving out of the way.

Do not be afraid to use healing skills or potions. Defense buffs can be good too. If you’re out of the invincible buff then your only option is to dodge and keep on dodging until there is a safe spot to stop and attack.

This continues until she is defeated, though the lower her health gets, her multi-hit sword skill is one of her most used skills so watch out. Before she is defeated, make sure you tell your NPC companion to get back so they don’t end up with getting the Last Attack. This is by pushing R1 and the Down arrow.

The equipment worn is a little overkill and not needed. Just make sure you have attack boosting items, because the more damage you deal, the quicker things die. I do recommend having Crimson Gauntlets as they ignore defense, causing you’re skills to do more damage when paired with Prismblade Exeterna and Saintblade Ragnarok.

You can get Crimson Gauntlets by completing the third implementation requirement under Adjustment Plan – Favoring Attack Over Defense. Once implemented, it becomes a rare drop from NM Gluttonous Rafflesia in floor 88 of Aincrad.

This is a difficult fight so don’t be alarmed if you fail a couple of times. To make things easier, set the mission to Normal difficulty – while still tough, it’s not as insane as if you set it on Death Game. The recommended level is still 230, even on Death Game but it is more difficult.

Good luck and remember to have fun!