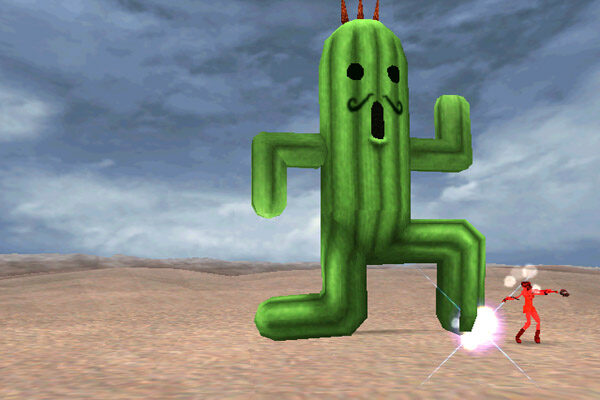 Do you remember those irritating little fairy dudes from Harry Potter? The ones that emerged from the crap-stained curtains and Final Fantasy tried to bite everyone right in the face with their tiny-yet-pointy-and-probably-hurty teeth? These buggers are the Cactuars of Harry Potter.

By which, I mean they aren’t particularly imposing opponents. The sort of mischievous, malevolent, mythical dudes who just want to be a pain in the butt. Because they can.

The Cactuar is a real series stalwart, appearing in every game since Final Fantasy VI. It’s an anthropomorphic cactus-midget, with odd stiff legs and an empty, slightly creepy hole-face. They are usually encountered in desert environments, as you’d expect, and attack with their patented 1000 Needles move. This fixed, non-elemental, unblockable damage is nothing particularly interesting, and their other moves are generally rather feeble. 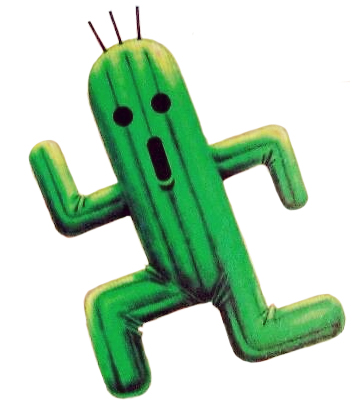 But that isn’t the issue. These wily beasts don’t have much HP, but are notoriously evasive and difficult to take out. Even more so, when you consider their penchant for hiding in the sand like big girls between rounds. These sorts of shenanigans make the Cactuar one of the most notable returning Final Fantasy creatures. It has a hook, a gimmick, like the Tonberry taking bullets like the Terminator before suddenly dashing forward and planting a rusty blade in your skull.

Being such a pain, there is usually a great experience reward for defeating a Cactuar, or other prize. But those are just the standard ones; in later games a big ol’ giant Cactus-freak with a mustache appears as a summon.

Final Fantasy VIII’s Jumbo Cactuar provided me one of the biggest gaming WTF moments of my life. Not only did it look… like that, but it uses an upgraded form of that attack: 10,000 needles. This damage this dealt, of course, exceeded the 9999 cap. Which, at the time, was completely unheard of, and destroyed my whole belief system. What’s real? What isn’t? How could I know?