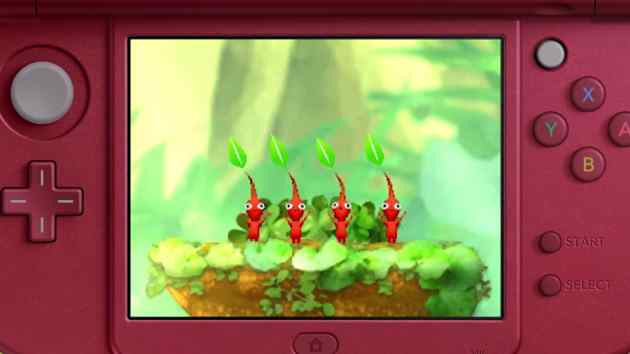 Almost one year ago, Shigeru Miyamoto revealed that a new Pikmin game was in development and close to completion.  In today’s Nintendo Direct presentation, it seems like that game has finally been revealed.  Granted, it’s not completely clear whether or not this is the same Pikmin 4 game that Miyamoto described then as an official title has not been attached to the game.  The new game is also not exactly what fans would expect to see from Pikmin 4 as it will release exclusively for the 3DS and will be a 2D platformer as opposed to the unique RTS-style that the series is known for.

This unnamed Pikmin game still has a focus on gathering hordes of the sentient plants that the series is named for and commanding them to solve puzzles and battle giant beasts, but the core gameplay has taken a shift to simple, side-scrolling action.  Red, blue, and yellow Pikmin will all appear with their unique traits from the main series intact.  Red Pikmin are immune to fire, blue can breath underwater, and yellow can be thrown farther.  It’s currently unknown if the white, purple, flying, and stone Pikmin from the sequels will appear in the game.

The reveal for the 3DS game closed a Nintendo Direct that also revealed new amiibo for The Legend of Zelda series, a massive update for Streetpass that includes five new games, and 3DS ports for Super Mario Maker and Yoshi’s Wooly World.  The game is scheduled to release sometime in 2017.  You can watch the Direct in its entirety here.  What do you think about the newest game?  Does this new spin-off peak your curiousity, or are you just keeping your fingers crossed on the NX?  Leave a comment below and let us know what you think.

Follow us and get the latest news delivered to your timeline!
3DSNintendoNintendo DirectpikminPlatformer
Previous ArticleThe Best PS Now Games You Can Play on PC Right NowNext ArticleTop 10 Overlooked Characters for Injustice 2