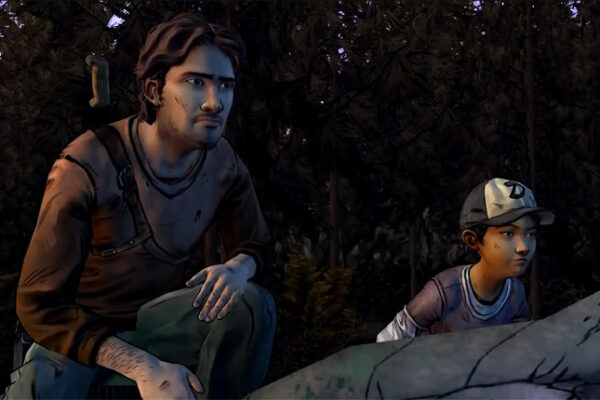 The second episode of Telltale Games The Walking Dead, A House Divided, has been released on March 4th and Clementine’s story is back for a whole new adventure filled with stunning revelations. Choices made during the first episode, All That Remains, will affect the development of this chapter and consecutively generate different outcomes at certain times.

A House Divided catches up with the latest events of episode one, where Clementine had to choose between saving Luke or Pete. The beginning depends exclusively on players’ decision, however Pete’s fate is already defined and he won’t survive the escape. Furthermore, this episode will unveil the future of the cabin group, as well as its enemies.

Clementine will run and hide with whoever she chose to save at the end of episode one. If she preferred to rescue Nick, then they’ll both find a small cabin and lock themselves there until the walkers calm down. In the meanwhile, Nick will act extremely depressed and get himself drunk with the whiskey stored inside. Players can then try to support him into getting out of there alive or show disdain towards his pain. If Pete was saved, then Clementine will end up in a small truck with a wounded Pete. After realizing that Pete can’t be saved, Clem can choose to be friendly by offering him some water and cigarettes or deny him the goods. Eventually, Clementine is able to escape with the assistance of her chosen companion and reach the main cabin by herself.

Major Decision: Be Friendly or Conflicting with Nick/Pete.

Tip: Try to be supportive with Nick, he’ll remember your words later on.

Carlos and Rebecca go out to look for the rest of the members when Clementine arrives and reveals them what happened back at the river’s stream. Before leaving, Carlos asks Clem to look after Sarah. While the two girls take pictures of each other with an old automatic camera, a strange man approaches the cabin. Sarah recognizes the man and identifies him as dangerous. Clementine has no choice but to handle the talking. Soon enough and due to his persistent questionnaire, she notices that it might be Carver, the man feared by the group. Clementine tries to protect her friends continuously but Carver finds out the truth when he finds Sarah’s photograph lying on the ground. When the group returns home, they realize Carver has discovered their hideout and they must immediately leave. While discussing the matter, Sarah mentions that Carver saw her picture and Carlos gets angry. Players can then back up Sarah or pretend they didn’t know anything.

Major Decision: Back up Sarah about the photograph or remain silent.

Tip: Don’t be too aggressive towards Carver, he knows you’re covering for the cabin group.

Part 3: On the Run Towards North

The group hits the road towards north, hoping to reach the mountains, where they can easily lose Carver and his men. If players saved Pete, the group will try to find what’s left of him at the truck location. Five days later, the party finally reaches its destination but first they must cross a damaged bridge crowded with walkers. After taking down several zombies, Clem and Luke meet with a strange armed guy who offers them assistance. In the meanwhile, Nick approaches and he immediately loses control. Despite what his friends tell him, he ends up shooting the friendly guy. The group crosses the bridge and scavengers a nearby small cabin, where Clementine finds some food and a knife.

Tip: Fight your way and save Luke – after dropping your hammer, grab nearby weapons to defeat walkers.

At the doors of a huge ski lodge, the party looks around for an entrance, while Clem climbs a tower to recon the area. She spots two flash lights around the bridge and immediately comes down. But she’s not really able to tell the news, since she realizes Kenny is alive and among the hostile group. After a short introduction, Kenny vouches for the cabin group and the new survivors offer temporary shelter. While Kenny and his girlfriend, Sarita, guides the guests around the house, Clem helps Walter with the dinner. However, she realizes that something is wrong when she see a peach can that looks exactly as the ones found in the small cabin near the bridge. Besides, Walter mentions another member who’s outside scouting, Matthew. When the dinner is served, Clementine is able to choose sitting near Kenny or Luke. Anyhow, Kenny will end up arguing with Luke and Nick about Clementine’s future.

Tip: Try to be coherent and stick with one group, playing two sides at once might not be the best idea.

Part 5: The Truth and Only the Truth

Walter speaks with Clementine about values and literature and once again, he mentions his dear friend Matthew. It’s late and he hasn’t returned yet, which makes Clem very nervous. Kenny and Walter go around the lodge to check the windows before the storm hits and they find a suspicious woman, who claims to be Bonnie, a starving mother begging for food. Walters hands a crate full of food and she leaves. Back at the lodge, Luke reveals to Clem that Matthew is actually the guy shot by Nick at the bridge and asks her to hide the knife found at the small cabin. But it’s too late, Walter has already found it and demands an explanation. Players can either lie or tell him the truth about Nick and the shooting at the bridge. Also, if he’s not convinced that it was all an accident, he’ll take revenge later on.

Major Decision: Lie or tell the truth about Matthew’s murder.

Tip: You should tell the truth about Nick’s actions; else Walter will let Nick die later on.

As the storm approaches, the windmill gets jammed and starts making loud noises, which soon enough draws walkers’ attention to that specific zone. The two groups grab their weapons and prepare for a huge invasion. Clem shuts down the windmill but as soon as she finishes, walkers are already everywhere. During the fight, everyone look after each other’s back. Even Walker will save Nick, if he was approached correctly during the last part. After a long conflict, the remaining walkers start getting shoot by another party – Carver has successfully tracked the cabin group.

Major Decision (Result): Persuade Walter that Nick is a good man or tell him Nick is just another ordinary guy.

Part 7: Point of No Return

Carver, Bonnie and his men take most of the group members as hostages inside the mansion. However, Luke and Kenny are able to escape and Clementine joins Alvin and Rebecca who are hidden upstairs. Carver demands to see Rebecca, who’s carrying his child, and since the group doesn’t collaborate, he starts breaking Carlos’ fingers. Clementine must make a crucial decision – surrender in order to save Carlos or go out looking for Luke and Kenny, who’ll be able to help from the outside. If Clem surrenders, she’ll join the hostage party. However, Kenny will start shooting Carver’s men and he will kill Walter. On the other hand, if Clem goes outside and choose to fight until the end, he will also kill Alvin. The episode ends with Luke missing and everyone else being held hostage.