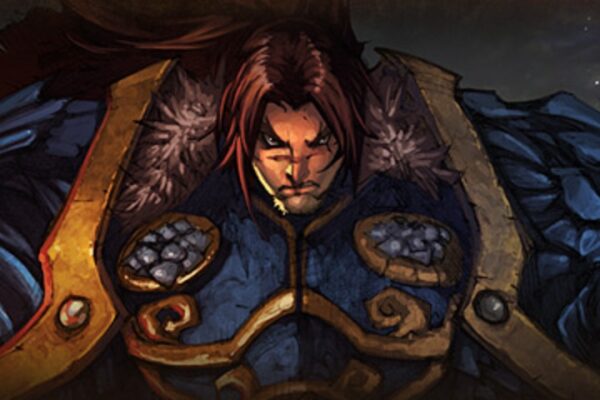 The Grand Tournament is coming to Hearthstone soon, and all of the cards have been revealed.  To finish out our preview of the expansion, we’ll be looking at all of the new class legendaries and one neutral legendary that demonstrates one of the new mechanics coming to the game.

We also have news of new rewards being added to the game for playing in ranked mode.  Starting this month, every player to rank higher than 20 will receive a chest of prizes.  These chests will contain the monthly card back as awarded for reaching rank 20 in previous seasons as well as golden cards and dust.  The higher you climb the ladder, the better your chest will be.  Your chest will also be based on the highest rank you reached within the month rather than your current rank when the month ends, so you have no reason to stop playing on ladder and trying to climb as high as you can.  The best chest is earned by reaching rank 5, but you’ll still have a shot at hitting rank legend and earning points towards a spot at the Hearthstone World Championship.

This is great change to the game as Hearthstone has had a serious issue with players using powerful decks at rank 20 and casual mode in order to grind gold against inexperienced players.  Before, the only incentive to climb the ladder was the exclusive card back, which was easy to obtain, or points for the Championship at rank legend that only so many have the time to reach for.  Anything inbetween ranks 20 and legend was just a matter of grinding gold, and bullying unsuspecting players produced gold much faster.  With incentive to climb latter, Hearthstone should become more welcoming to new players and experimentation with more quirky decks.  With that out of the way, let’s get into some of the newest legendary cards. 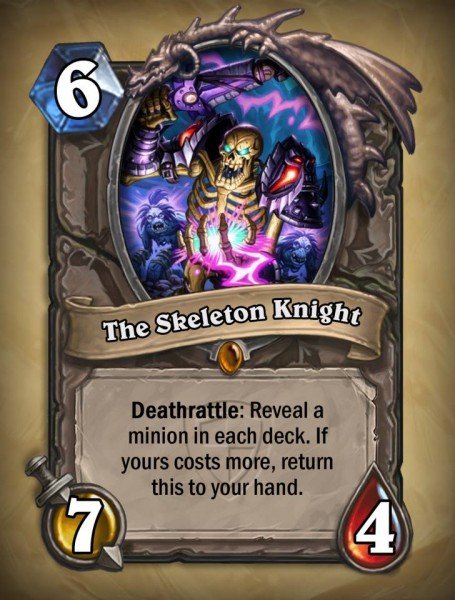 Let’s start things off with a look at the new jousting mechanic.  Jousting effects pull a random minion from each deck and compare there mana costs.  If yours has the higher cost, you’ll win the joust and trigger a special effect.  With The Skeleton Knight, you’ll joust when he dies and get a chance to bring him back to your hand to play again.  Jousting is mainly being added to discourage aggressive decks with low-cost minions by rewarding decks that have more late-game minions.  The major issue with jousting is that you have to consider how good the card is even if you lose the joust.  While there are plenty of good joust cards, Skeleton Knight is one of the worst as top-heavy minions are very easy to trade up on.  Even if you are able to play the Skeleton Knight a few times before he goes down for good, he’ll rarely give your opponent much trouble in knocking him back. 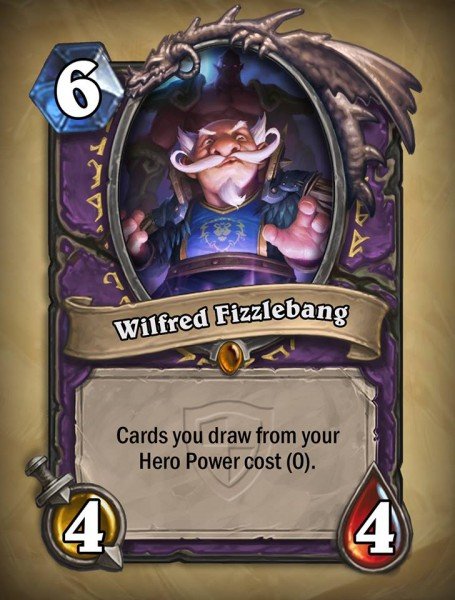 Wilfred Fizzlebang, the gnome warlock famous for unintentionally summoning the fearsome Jaraxxus, looks like a potent card, but there’s also a lot holding him back.  On the one hand, making any card cost zero mana is extremely useful and can lead to incredible plays.  However, there is no chance of Wilfred being left alive for more than one turn.  By turn 6, your opponent is not going to have much trouble clearing a 4/4 no matter what class s/he is playing as.  As such, it’s best to think of him as an 8 mana minion that draws you a card and reduces its cost.  That can still be incredibly strong, but also keep in mind that you won’t know what you’re discounting until after you’ve discounted it.  You’ll cheer for a free Jaraxxus or Malganis, but something will probably get broken if you just knock one mana off of Mortal Coil. 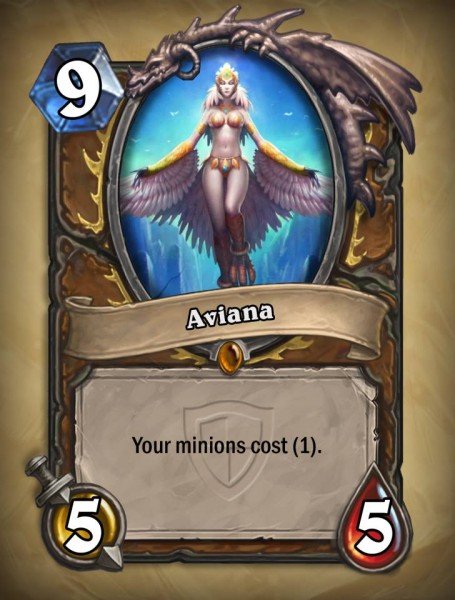 Again, we have an issue of an incredibly strong effect being attached to a weak body.  If most decks can deal with a 4/4 by turn 6, you can bet that a 5/5 at turn 9 won’t last.  However, Aviana does have the advantage of being a Druid card and the Druid class is infamous for manipulating the mana curve.  Combined with an Innervate or two, Aviana can give you an unfathomably scary board in the blink of an eye.  Even without Innervate, you can still play her on turn 10 with any minion that can help protect her, like Kel’Thuzad or Ancient of War.  Keep her alive for even one turn and your board presence is going to be indomitable.  If there’s one thing Aviana is likely to excel at, it’s making Ramp Druid even more fearsome than it already is. 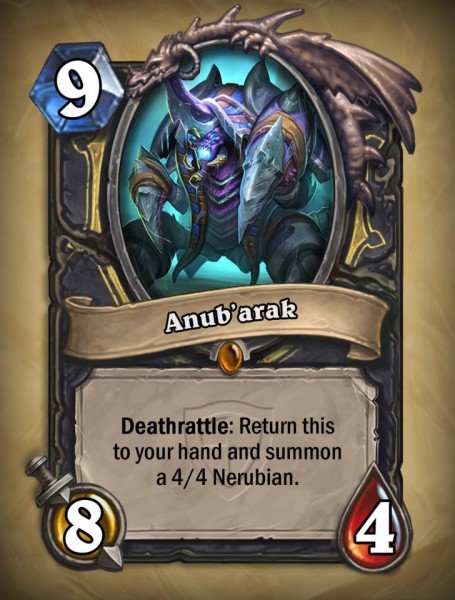 Like I said with Skeleton Knight, top-heavy minions are generally bad because they’re easy to shut down.  Anub’arak, however, looks to be the exception to that rule.  Along with a guarantee of returning to your hand, he also leaves a Nerubian behind to maintain board-presence.  His only weakness is silence, which shuts down his cycle of aggression entirely.  Anub’arak will work best in decks filled with cards that can bait out silence effects early and leave the path open for him to clinch the game.  It’s an interesting idea, but how viable he actually is will have to be seen. 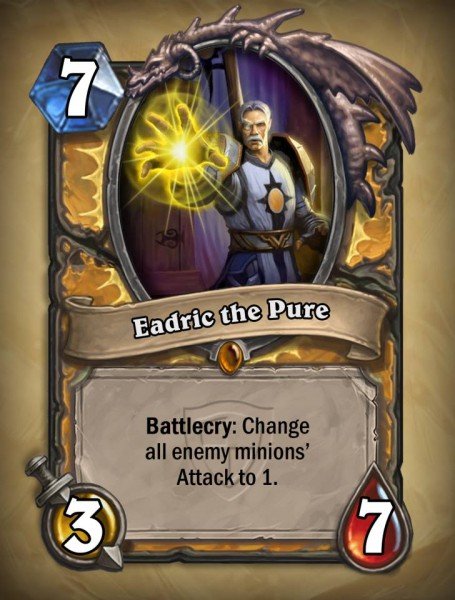 Depending on where the game is at when you play him, Eadric the Pure is either one of the best cards or one of the worst.  Reducing the attack of all enemy minions to 1 can take the teeth out of even the fiercest opposition.  However, if you’re already far enough behind, that may still be enough damage to finish you off.  If the aggressive meta game that Hearthstone is currently experiencing continues, than Eadric’s presence will be moot.  However, in a slower, more control focused meta, he can easily become an auto-include for any Paladin deck.  His worth simply comes down to what your opponent is playing rather than building your own deck around him. 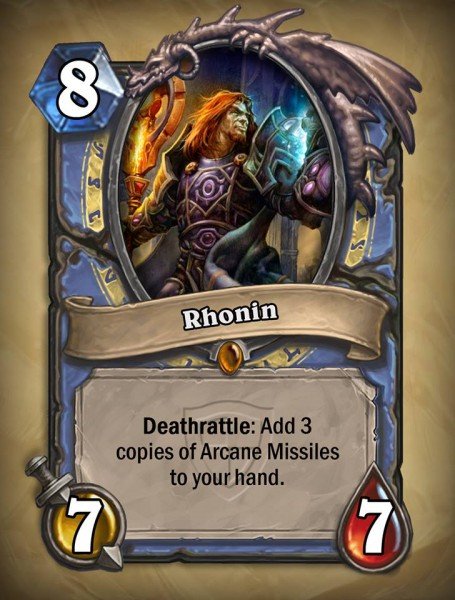 Having a handful of Arcane Missiles doesn’t sound great, but that’s only because Arcane Missiles is a weak card when played once.  Stack three of them together, and you suddenly have a better version of Avenging Wrath for half the cost.  Plus, having it across three cards means that you can keep one or two in reserve for later.  Also, teaming up Rhonin and Antonidas is pretty good when it comes to straight-up winning the game.  Really, the only downside to Rhonin is that your opponent will have a good shot at silencing him and denying his effect entirely. 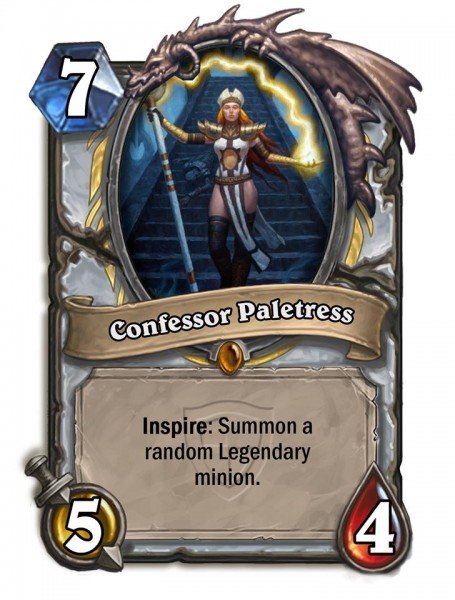 Once again, stat lines are very important.  Compared to Fizzlebang and Aviana, Paletress is the least reliable of them all because of the great amount of randomness involved in her.  While summoning a free legendary sounds incredible, keep in mind that there are plenty of weak legendaries to go with the great ones.  Yeah, it would be great to suddenly have Ysera or Tirion or Deathwing on the board, but you could also end up with Nat Pagle or Stalagg or either of the new Hunter legendaries (we’ll get to them).  Plus, you’re only going to get one good shot at bringing a good one to the board as your opponent isn’t going to let you roll the dice for long. 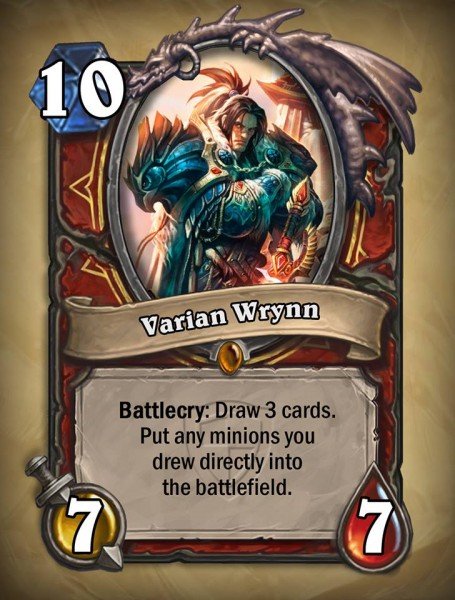 Warrior may have struck gold with the best new class legendary.  High King Varian Wrynn does take a lot of commitment with a cost of 10 mana, but he can easily seal the game in your favor.  Even in the worst case scenario, you get a 7/7 and draw three spells and/or weapons for your next turn.  Best case scenario puts three more massive minions onto the board and win you the game.  Imagine summoning Deathwing, Kel’thuzad, and Grommash all after putting Varian on the board.  Even getting your smallest minions is still an incredible effect.  The only downsides is that Varian does poorly in high-speed games and summoning minions with valuable battlecries can be suboptimal, but he is a monster in long games with a focus on controlling the board.  I was hoping to see more good Arena cards for Warrior, and I can’t think of a more beastly way to win an Arena match than with the warrior king of the Alliance. 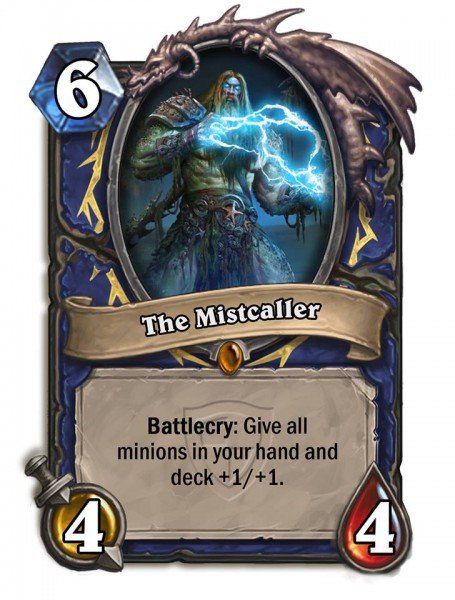 This guy has a lot of excitement behind him, but let’s really think about how viable he is.  In the long game, Mistcaller is incredible as he applies a permanent buff to all of your minions… That is, all of your minions that aren’t on the board already.  With a 4/4 stat line at 6 mana, he does little to effect the current state of the board.  While he is a big investment for the future of the game, he also gives your opponent an opening to seize the board now and make those buffs a moot point.  Having all those buffs sitting in your deck might sound like overkill, but it could all easily end up as unused resources.  He’ll likely be a strong card, but he’s not going to seal games in your favor as many are predicting. 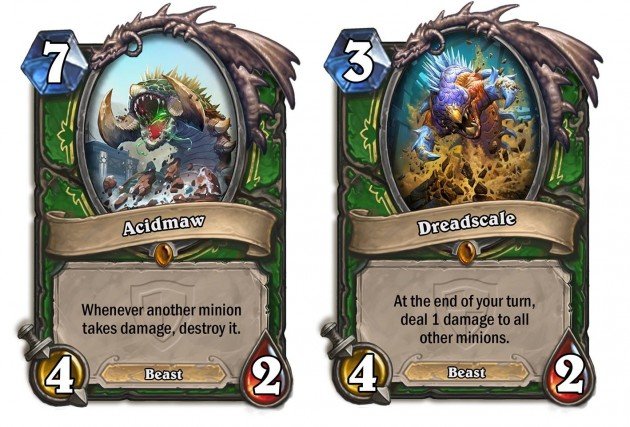 That’s right, Hunter is actually getting two separate legendaries with The Grand Tournament instead of just one.  This would be incredibly exciting news for Hunter players if the legendaries weren’t so underwhelming.  Acidmaw has the single worst stat line in Hearthstone history and a Magma Rager has a better chance of surviving a turn then he does.  The fact that his effect can also be used against you does not make him any more appealing.  Yes, he provides a board-clear when combined with Unleash the Hounds or his buddy Dreadscale, but you more or less have a worst Twisting Nether and when’s the last time you saw a Warlock run that.  Dreadscale, meanwhile, is basically half a Baron Geddon, and that can actually be pretty useful in Control Hunter decks that need to shut down early aggression.  Still, these are easily the least exciting class legendaries for this expansion.

If you want to see all of the new cards coming to Hearthstone, you can see them here.  There’s plenty of other incredible new cards to see that may make bold new decks possible.  Dragons with taunt, discard synergy for Warlock, good Arena cards for Warrior, and much more are coming when The Grand Tournament releases on August 24th.  Let us know what cards you’re most excited to play with in the comments below.