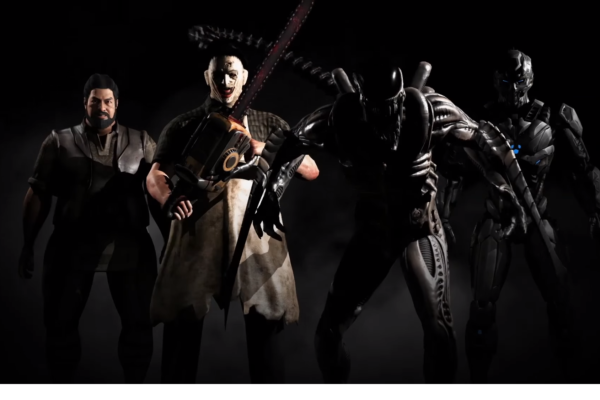 All the major details have been released regarding the second DLC pack for Mortal Kombat X with a new gameplay trailer showing off the four upcoming characters.  First up is Leatherface from the Texas Chainsaw Massacre series of films who naturally wields his chainsaw into battle.  His chainsaw swings in wide arcs and can dig into the opponent and even manages to defy gravity for his X-ray attack.  However, his moveset isn’t built exclusively around this one weapon.  Some attacks will have him holster the saw on his back in favor of switching to old-fashioned fisticuffs.  He also carries a hammer for additional close-combat brutality.  How his three variants will differ from each other is still a complete mystery other than perhaps having certain versions focusing more or less on using the chainsaw.

Next up is Triborg who is an amalgam of the classic cyborg characters Sektor, Cyrax, and Cyber Smoke.  The three characters are used as Triborg’s variants, but the game makes it clear that Triborg himself is all three of them combined into one rather than just being a placeholder for the others.  All three appear in Triborg’s entrance animation and the two unused cyborgs will assist with one of his fatalities.  While Sektor and Cyrax appeared in the previous MK game, they’ve both picked up a few new tricks for their return in MKX.  Sektor now has a chest-based flamethrower that he can easily chain into, while Cyrax has some new buzzsaw techniques and upward-arching grenades .  Cyber Smoke is the only classic cyborg who didn’t make the roster in MK9, only appearing in his human form, and has plenty to offer with his long-awaited return.  Cyber Smoke can teleport to catch his opponent off-guard and can pull the enemy in close with several short-range cables.  Although he’s based on returning characters, Triborg is certainly a lot more than just a pile of recycled concepts.

Bo’ Rai Cho also makes a return to the MK series since his last appearance in 2006’s Mortal Kombat: Armageddon.  He is the drunken master who trained series mainstay Liu Kang and wields some of the most disgusting techniques in the series.  His most vulgar techniques include projectile vomiting and letting one rip right in his opponent’s face.  He will have one variant more focused on fighting with his staff for those looking for a more dignified take on the character.

Finally, there’s the titular xenomorph alien from the Alien film franchise.  In MKX, the alien is hybridized with the DNA of a Tarkatan demon (think Baraka) and wields the iconic arm-blades of the creatures.  While this alien is more humanoid in shape than most xenomorphs, it will use plenty of savage attacks and focus on close-range slashing.  It seems that its variants will have one focused on using the Tarkatan blades, one focused more on its spear-like tail, and even one based on the alien queen that can place face-hugger eggs on the ground and call in a second xeno for assists.

That’s not all, as anyone who didn’t receive the playable character Goro through preordering will have him included in Kombat Pack 2.  The classic stage, The Pit, will also be added to MKX complete with Blaze fighting in the background.  The Pit stage isn’t currently listed as one of the items included in Kombat Pack 2, so this may be added through a free update.  What will be included in the pack will be three new sets of skins.  This includes the Kold War Pack, including Kold War Scorpion, the Brazil Skin Pack, and the Apocalypse Pack.

Release date and pricing for Kombat Pack 2 haven’t been announced, but the first pack went for $30 and the second will likely share that price.  You can check out the gameplay trailer here, but be warned that it contains its fair share of MK gruesomeness.  Will you be picking up Kombat Pack 2?  Which upcoming combatant are you most looking forward to?  Leave a comment below and let us know what you think.