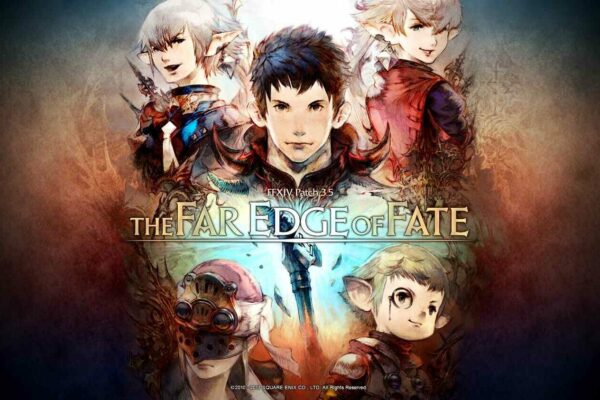 For anyone unaware, Square Enix has made another Final Fantasy MMORPG called Final Fantasy 14 (FF14). The game had a horrible start but has redeemed itself in the eyes of the community with the release of A Realm Reborn. FF14 is on the verge of its next expansion StormBlood which will be released on June 20th, 2017. While we are waiting for the end of the current expansion, Heavensward, players have Patch 3.5 The Far Edge of Fate to hold us over.

I was going to start with the new raids that were introduced but that would be doing a disservice to the HUGE quality of life (QOL) changes we got this patch. The first, and biggest game-changer was the implementation of the Cross-Server Party Finder. Most of the instanced dungeons help players find companions across the data centers via Duty Finder (DF) to complete content. A few patches ago they added the Raid Finder (RF) for the 8 man raids, Alexander, and extreme Primal/Eikon fights, Sophia, Zurvan, Niddhog, etc. That was a great addition but it was not stopping the frequent server migration that started in Patch 3.1 of players looking for more people to “play” with.

The main reason why this is important is that the old-school Party Finder (PF) allowed for players to form groups to enter content. If a player was on a smaller server the likelihood of finding other like-minded players was very slim. Even my mid to smallish server of Brynhildr on Primal Data Center had 5 to 8 PF groups up nightly during peak times. Since the patch, released Tuesday, the PF groups have jumped up to 30 or 50 because it reaches across the whole data center. There are some other elements that go with it so you can read up on that in the linked patch notes.

Group Pose Gets Some Upgrades

For the photographers in-game, they added and expanded the group pose camera options. Players can now change the lighting, add effects, filters, etc to their photos. Players can also take close-up shots and get their favorite NPCs in on the picture. I don’t take many in-game shots but it was cool to see added.

One of the last things I will highlight is the implementation of Egi-Glamours for the Summoner Job. Egi’s are the FF14 version of pets. The players have been requesting this since the beginning of Heavensward so now the pets can return to their Carbuncle forms.

The end of the Heavensward conflict occurred in patch 3.4 so the game is moving us into the new expansion scenario. The main story quest (MSQ) will be told in two parts and players get to experience the first patch. The campaign lasts for about an hour if players don’t skip the cut scenes and speak to all the NPCs around each quest marker, which I encourage. A lot of things were revealed but it does end on a satisfying cliffhanger.

Players will also get the conclusion of the 24 man dungeon scenario with Dun Scaith. The dungeon can be a bit challenging to players learning the mechanics but once you figure it out it’s only a matter of execution. The biggest hurdle is getting the other 23 players to cooperate and follow directions. The dungeon is stylish and has an Alice in Wonderland vibe that I’m sure everyone will appreciate. The reward for the dungeon is a new armor and the i270 upgrade token for Scripture Tome gear. As a quick fan service bit, head to the Gold Saucer once you finish the dungeon and you might see some familiar faces.

The next pieces of content were the two new dungeons, Sohm Al hard mode, and Baelsar’s Wall. The latter is a part of the MSQ so players have to complete it before it is unlocked. The former can be found via Moogle NPC in Idyllshire hub. Both of these dungeons were great to trek through and the monsters within hit hard. My favorite would have to be Baelsar’s Wall because of the lore attached to it and the final boss.

Face The Demon, Zurvan of the Warring Triad

Players will also get the conclusion of the Warring Triad storyline by facing Zurvan the Demon. Zurvan is the final Eikon of the Triad after Sephirot and Sophia. Players will find out where the mysterious boy came from and the identity of his master. I must say I wasn’t expecting the story to end quite the way it did but it was an awesome adventure along the way. The story battle itself was a bit challenging but nothing players can’t tackle with some practice. Once the story is complete, players will be able to challenge the extreme version of Zurvan.

The last piece of content is the new Player versus Player (PVP) event based on a Japanese show called Garo. Think Power Rangers and you will be on the right track.  The event allows for players to receive unique titles, class/job-specific gear, and mounts. FF14 is a more Player versus Enemy (PvE) styled game so PVP participation was low at best. This event has given PVP some life to help with the cue times. Another QOL that helped with this event is the ability to cue without worrying about your Grand Company (GC) Affiliation. Players chose their GC at the beginning of the game and PVP was locked behind it until now which made cues long and unbearable.

Get Ready to Jump In

All in all, this patch is a great time for returning and new players to jump in. There are so many more things I could have highlighted so read over the patch notes if you’re interested. There is more content to hold us over until the next patch and enough incentive for players to catch up to the end game. I was very satisfied with how everything turned out and I am craving more which is always good.