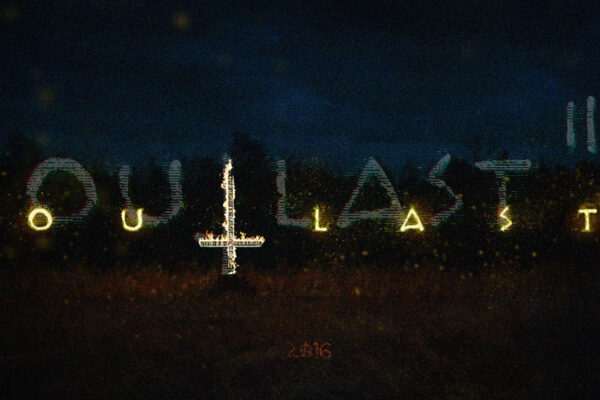 Red Barrels seems to be a company that know how to freak out their target audience. Both Outlast and Outlast: Whistleblower had some pretty intense and terrifying moments, some which still scare me today despite knowing what is going to happen.

The reveal trailer for Outlast 2 hit Youtube and I was stoked; I’ve been waiting for anything relating to Outlast 2. Even if it was little teasers on Twitter. The trailer itself doesn’t reveal too much, which isn’t a surprise in itself, though it does leave me wanting to know more about the story and what is going to happen.

And the ending of that trailer, did anyone else jump like I did? Just me?

We know the game will be taking place in the same universe as Outlast and Whistleblower. We know there is going to be a different setting with different characters. I’m eager to learn more about the world of Outlast and how they’re going to incorporate all the lore they’ve created during the first game. Were there other experiments done in different laboratories? Is the Walrider going to affect those it comes into contact with? Just how is the story going to work?

One of the biggest questions is did Waylon’s footage put Murkoff fully out of business and for justice to be served?

I’m looking forward to what kind of enemies they create as well. Even though it’s not taking place in Mount Massive Asylum, there is still plenty of ways to create Variants, or something else entirely. This really opens up the possibilities and gives Red Barrels a little more freedom since they can take from other sources.

Story aside, the biggest thing I’m excited for is the scare factor. I play horror games to get scared and lately horror games just haven’t been that scary. Some disturbing moments but nothing that has made my heart pound, my palms sweat and the urge to curl up into a ball and sob. Outlast achieved that. It still does. I spoke that some moments still scare me. The dark sewer part in Outlast where Chris Walker is waiting for you in the water. Running away from circular saw man aka Frank Manera in Whistleblower.

Red Barrels delivered the scares and I have no doubt that they will be able to manage the same level of terror in Outlast 2. I really cannot wait to be terrified and considering it has a tentative release date of Fall 2016, I don’t have too long to go.

For those that haven’t seen it, here is the teaser trailer for Outlast 2:

So, what do you all think? Are you as excited as I am or is Outlast not something you enjoy? Or do you feel like they should have kept it as 1 game and not bothered with a sequel? Let me know how you feel in the comments below!