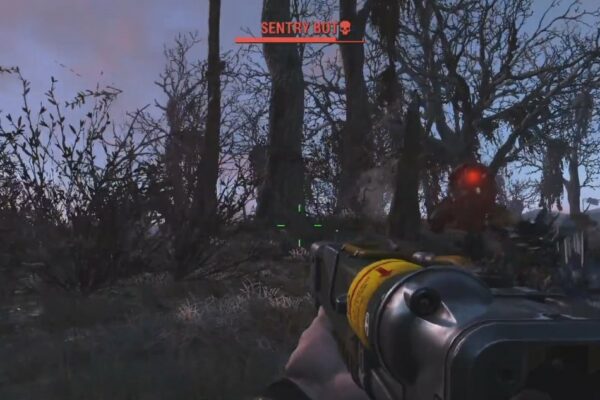 The first time I met a Sentry Bot in Fallout 4, I was around level 12 and it wan not pleasant at all. It was during the Lost Patrol mission (when other almost impossible to kill mutants followed) and I though I would lose my mind. Because I certainly lost my life a ton of times before finally figuring out how to kill a Sentry Bot and I am here to share with you how to destroy a Sentry Bot in Fallout 4 easily. Or at least as easy as possible.

No matter what your level is, meeting a Sentry Bot is never pleasant. These robots are highly armored and deal a ton of damage even if you are wearing a Power Armor. Early on especially, when you have low health and weapons that are not so great, they will be a real pain to destroy. But you can do it with a bit of running around and good aiming at their weak spot. And we have the complete guide here!

In order to easily kill a Sentry Bot, you have to shoot the Fusion Core on its back. However, being able to get into a position to shoot them is pretty difficult because as soon as you close in, the robot will turn around and you won’t be able to shoot anymore. Here is how to do it:

1. Bring a companion. Send them forward and as the Sentry Bot is gunning at them, quickly run at the robot’s back, enter VATS and empty whatever gun you’re using into their Fusion Core.

2. After meeting the Sentry Bot, run away until they stop following you. Now you know where they are and start sneaking. Get close enough without them noticing you (they usually follow a preset patrolling pattern) and sneak attack their Fusion Core for the extra damage. This is the ideal, easiest way to take them out – if you are patient!

3. Challenge them to a fair fight. Well, not really: stay away from its shooting as much as possible, especially during the crazy time when it’s glowing and evacuating all that steam. As soon as that’s over, though, it will be immobile for a very short amount of time. Quickly run behind it or in an area that you can target its Fusion Core in the back and shoot at it in VATS.

Oh, and no matter what option you choose for taking it out, don’t forget to keep the distance too: after killing the robot, a mini nuclear explosion will take its place, potentially killing you. Yes, they are that bad!

But at least you know now how to destroy a sentry bot in the game and do it as easy as possible. And if you want to check out how to destroy another difficult enemy, read our guide on how to easily kill Behemots.