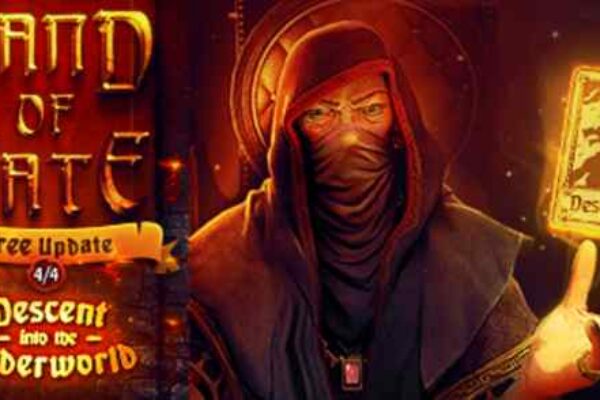 Defiant Development, creators of the deck-building/rouge-like/RPG/brawler hybrid Hand of Fate, has been celebrating the holiday season with free DLC updates to the game.  The fourth and final of these updates, Descent into the Underworld, was recently released on Steam.  This update adds a new set of missions to shuffle into your campaigns based on journeying into the underworld and battling against a new enemy type called the Hell Beast.  Hell Beasts are reskins of the ratmen enemies with more health, but don’t deal poison damage.  It won’t just be combat Along with new events, there is also plenty of new equipment to obtain.

The previous free updates in this holiday set were Winters Hunt, The White Council, and Halls of the Goblin King.  Winters Hunt tasked players with tracking the fearsome White Minotaur boss.  The White Council set players against a band of mages to disrupt their rituals and break their hold over the locals.  Halls of the Goblin King focuses on dungeon-crawling over combat with raiding trap-filled dungeons to help the unlucky Mr. Lionel with his woes.  While Descent into the Underworld is the last of this collection of free DLC, Defiant Development has released free DLC for Hand of Fate before this set with the Murder at Sea update and there may still be more in the future.  Hand of Fate is available for PC, Mac, Linux, Playstation 4, and Xbox One, but the free updates will not be added to the console versions.

It’s been a good year for free content in video games.  Along with Hand of Fate, many major releases have been willing to add free DLC to keep players coming back, such as The Witcher 3, Splatoon, and Grand Theft Auto V.  What are some of your favorite free content updates?  Will Descent into the Underworld have you delving into Hand of Fate?  Leave a comment below and let us know what you think.