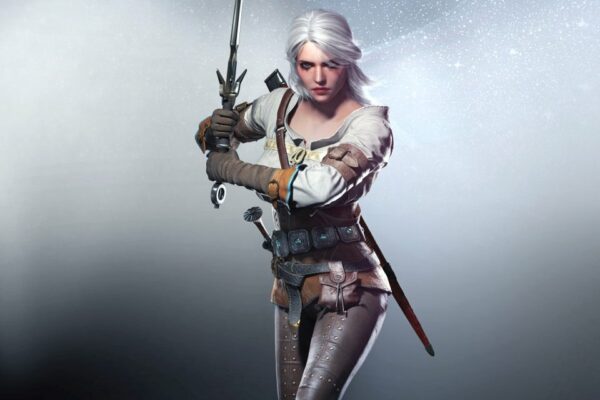 Princess Cirilla, better known as Ciri, is one of the main characters in Andrzej Sapowski’s novels.  She is the daughter of Duny and Pavetta, and grandchild of Queen Calanthe and King Roegner

To understand why Ciri is so special you need to understand her families past. Geralt of Rivia was called upon by Queen Calanthe to ensure that Cintra is allied with Skellige, as her daughter Pavetta turned fifteen years old and therefore many turned up to ask for her hand in marriage. Although Geralt does not believe this to be why he was invited. Some time later, a knight who refuses to remove his helmet until after midnight arrives and announces his name as Urcheon of Erlenwald. He states that Princess Pavetta belongs to him due to The Law of Surprise. The Law of Surprise is a demand that can be made by a man who saves someone else’s life. It’s a request which means that the saviour can demand the person who’s life he has saved for something that he doesn’t know he has. The thing he didn’t know he had, was a child as while he was away his wife became pregnant with his child.

The queen admitted this was true, but refused his request to take her daughter Pavetta. Once the clock struck midnight she demanded that he remove his helm, which he did, and he didn’t have the head of a man but a head of a beast who was covered in spines and had fangs. The Queen invoked the Law of Surprise and said that her daughter must choose whether to go with the beast or to stay, assuming that she wouldn’t want to go near the beast. However much to her surprise he daughter wants to go with Urcheon and a riot then ensues as other attendants want to go after the beast. As Princess Pavetta sees her lover Urcheon being attacked, a force explodes out of her and furniture is flying about everywhere, becoming extremely dangerous to everyone there.

When Geralt steps in to help Urcheon and baron of Tigg, Coodcoodak, starts making animal noises which manages to distract Pavetta enabling Geralt to calm her down. Urcheon, also known as Duny, then explains their situation. He and Pavetta have being seeing eachother since she was fourteen they had fallen in love. Duny had been cursed as a child to look like a beast during the day and to look like a normal man from midnight to dawn. Queen Calanthe then agrees with their love and marriage. Duny wants to thank Geralt for saving his life so offers him anything he wants, so Geralt chooses to ask for something that which you already have but do not know, and informs everyone that Pavetta is pregnant, much to their surprise, and says that he want’s their child to be raised as a witcher. Their child was Princess Cirilla.

When she was an infant both of her parents were lost at sea and presumed dead so she spent most of her childhood with her grandmother queen Calanthe in Cintra.

During the slaughter of Cintra, she was Nilfgaardian knight but luckily escaped and wondered around Sodden until she was adopted by a merchants family whom Geralt had previously helped, ultimately reuniting the two of them. Geralt took her to Kaer Morhen to be trained as a witcher as a boy would, but under the supervision of Triss Merigold they agreed that she would not undergo mutation as normal witchers and she would be treated more like a growing girl. During this time, she was also confirmed as being a source like her mother, which is when someone is born with magical powers which are hard to control and often drives young sources mad if not trained properly. She often had nightmares about the Nilfgaardian knight and was always soothed be Geralt or Triss.

Triss and Geralt then take her to the Temple of Melitele to be tutored by Nenneke, a friend of Geralt’s and then she is trained to use her magical powers by Yennefer. Yennefer then took Ciri to Aretuza, a magical school for young girls, and intended to enrol her as a student. However while there before she could enrol, some people attempted to capture Ciri but failed as she escaped through an unstable portal and appeared in the Korath desert. While there she almost died, but was saved by a unicorn who helped her escape the desert.

She was then captured by a bounty hunter named Leo Bonhart who imprisoned her and forced her to fight in the arena. She then escaped from their clutches when in the village of Unicorn, but was seriously injured as she fled on her horse. Thankfully she was saved by Vysogota of Corvo before death, and he then nursed her back to full health at his hermitage.

She then left for the Tower of the Swallow, also known as Tor Zireael, which contains portals to many different worlds. She is forced to enter one of the portals to escape the bounty hunters pursuing her. Through one of the portals she arrives in the elven world ruled by Auberon Muircetach. When she arrived there she was told that she had to pay a debt to them, and they wanted her to have a child with the king, Auberon Muircetach. They tried multiple times to have a child, all without success. She was also told by him that even if they had a child, she would never be free. She then met with some Unicorns, including the one who saved her in the Korath desert before. They told Ciri how to escape and that the elves once had to power of the Gate of the Worlds, but they no longer do, and they needed Ciri to recover their power.

Ciri went to visit Auberon, but he had drunken a fertility potion in order to be more likely to have a child with Ciri, but this proved too strong and he was dead. She then attempted to escape that night by swimming with the current of the river, however she was caught by Eredin, who previously tried to control her, and they fought until Ciri won. She rode on her horse to escape, until she met the unicorn again, who she had nicknamed Horsey, and he offered her his help to escape. He explained that the world they are in used to be a human world until the elves came and killed them all, and that the same fate would befall Ciri’s world if the elves were to gain the power of the Gate of the Worlds again, and therefore be able to control time and space. He taught Ciri how to manifest her powers and jump into another world to escape. She did this but was unable to control it and had to jump through many worlds before finding her own one, where she then killed the bounty hunter Bonhart at Stygga castle.

Princess Cirilla had not been in any other games before, however she had previously been mentioned in the first Witcher game by an inkeeper when he was telling Geralt the tale of Cirilla, however Geralt did not know of any of this at the time as he did not remember anything of his previous life.

Ciri will be a playable character in The Witcher 3: Wild Hunt but only when the story brings her under your control, and this will be for around ten quests. She will differ from Geralt in the game, as she will only have one sword and she will also be faster, and have some different abilities that we do not know about yet. As the games are after all of the books and are canon, it will be the first time that Geralt and Ciri unite for a long time.