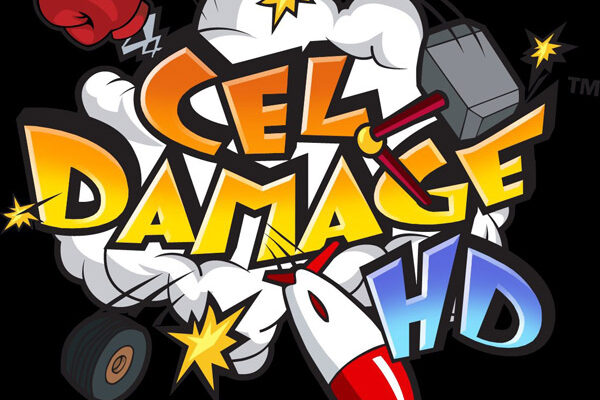 HDification (because that’s a term) has really been Sony’s thing of late. They’ve brought us the rather spangly Final Fantasy X HD, and a rather cool new God of War combo pack. And just when high definition couldn’t get any higher or… definitioner, there was another more obscure entry.

Feast your eyes on Cel Damage HD, which has just arrived on PSN.

This more obscure entry originally hit the Gamecube, PS2 and Xbox in 2001. It’s a brilliantly toontastic racer from Pseudo Interactive, which basically eschews the ‘racing’ in favour of ‘cutting your competitor’s SUV in half with a big ol’ chainsaw.’ Oh yes indeed. Buckle up, ladies and gentlemen, and we’ll take a look.

As we know, cartoon characters take all kinds of unholy punishment on a regular basis. How many anvils did Tom take to the face in pursuit of Jerry? How many cliffs did Wile E. Coyotte plummet over? And yet, resilient buggers that are, they always returned unscathed. And that’s the premise of Cel Damage.

In this demented car combat game, a crew of toon-freaks (safe in the knowledge that their death is never permanent) shoot, freeze, burn and otherwise explodinate each other. You can choose from the likes of Sinder, the furious demon midget, Fowl Mouth, the 1930s gangster duck, and B.T Bruno the portly truck driving dude. Each have their own personal weapon by default and their own vehicle. Not forgetting, naturally, their own selection of ‘humourous’ soundbites. There are three modes of play: Smack Attack, Flag Rally and Gate Relay. The first is merely a contest for ‘kills,’ while the others are a little more race-flavoured. Gate Relay sees you dashing in an underpants-on-fire hurry between checkpoints on the map, and Flag Rally has you collecting flags. Flags that roam the level independently on tiny little stumpy flag-legs.

Along the way, you’ll work through arenas sorted by a theme. Wild West, Space, Spooky, the usual cliches are out in force. On each, you’ll find Mario Kart-esque power up boxes, containing a random weapon. Some are more deadly than others, or allow for more fiendish tactics, and there’s a wide range. Freeze rays, tommy guns, hand grenades, axes, that old favourite the boxing-glove-on-a-spring… you’re spoilt for choice.

Cel Damage HD is not a remake. As with the HD Editions before it, this is simply a prettier version of what has gone before. It’s also rather a shame that the developers didn’t take the opportunity to add any online functionality. Nevertheless, the cel shading does look eye-massagingly pretty in HD. A little like the Wii U Edition of The Legend of Zelda: The Wind Waker.